Easily visible from space, Upheaval Dome is a mysterious geologic formation in the Island in the Sky district of Canyonlands National Park. Upheaval Dome is very different from the rest of Canyonlands, which consists of layers of red and white rock eroded by water and wind over time. It resembles a huge bowl 3 miles across with a multi-colored pointy rock protrusion in the middle. The reds and whites of rocks are more chaotic here—sometimes perpendicular to the rest of the park—and were not formed by rivers or wind. Geologists don't know how it was formed but have two competing theories: that a salt dome pushed up through layers of sand stone and then eroded away leaving the structure below; or that a meteor struck leaving a crater behind that was partially filled by the upheaval of rock. That two drastically different theories are in contention shows just how mysterious this feature is. It's also happens to be beautiful.

Short Run: There are two main routes to see Upheaval Dome: the easy and common way along Upheaval Dome Overlook Trail, and the long strenuous route along Syncline Loop Trail to Crater Spur Trail. The former is only 0.7 miles one way to superb elevated views of the whole bowl and dome, but it does require some steep climbs. The other option is to take the difficult Syncline Loop Trail in either direction to it's low point (~3 miles clockwise, ~5 counterclockwise), and then taking the Crater Spur Trail 1.6 miles. This will drop you off in the bottom of the bowl for a completely different, and very secluded, perspective (making this a loop would be 9.1 miles). 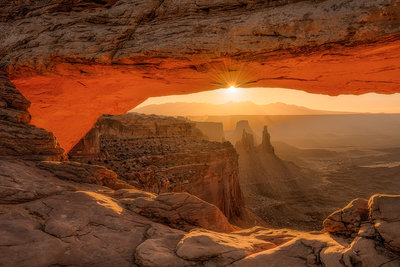