“A gorgeous singletrack stretch of southern Appalachia with plenty of elevation gain. ”

Coosa Backcountry Trail runs through rugged northern Georgia, northwest of Atlanta. It starts in Vogel State Park and then passes through Chattahoochee National Forest and Blood Mountain Wilderness Area. Many trail races and ultras include portions of this trail, including the GA Death Race.

The singletrack trail passes through prototypical southern Appalachian forest and gives the runner some serious, and steep, inclines.

This run starts in Vogel State park, which has an entrance fee.

There are several intersecting trails and potentially confusing pieces. It is advised to pick up a free map at the visitor center, if arriving without an appropriate map or form of guidance.

A nice option if you are looking for some additional hillwork, a short out-and back can be tacked on to the Coosa Backcountry Trail by heading west on the Duncan Ridge Trail a couple hundred yards to the summit of Coosa Bald then head down the Duncan Ridge Trail, which gets gradually steeper. It is just over a mile to the bottom at White Oak where you can then turn around and head back up the hill you just descended.

You begin your adventure by heading to Vogel State Park. Head to the visitor center, where a required permit and map can be obtained (which can be helpful due to other intersecting trails), and begin to follow the green blazes. Near cabin number 7, there will be a sign guiding you to the right and to the trailhead.

The trailhead is the beginning of both the Coosa Backcountry Trail as well as Big Hair Trail. This trail follows the creek until it hits a dirt road. You can head right or left. This description will cover heading right (counter-clockwise).

Shortly after heading right on the dirt road, the green-blazed Coosa Backcountry Trail bears right while the Bear Hair Trail splits to the left.

The Coosa climbs to GA 180 (Wolf Pen Gap Rd). Cross 180 and begin to descend to W Wolf Creek where there is a small camp area.

Past the creek, another climb follows before leveling out and heading to Calf Stomp Rd.

Cross the road and climb toward the namesake of the trail, Coosa Bald, which will be on your right.

For a time, Duncan Ridge Trail joins in the merriment.

There are some additional steep descents and ascents and a short stint on another dirt road, and you are only now getting to the midway point of this run.

The steepest climb comes after crossing GA 180 for a second time, as you head up the warmly named "Slaughter Mountain".

After the climb, continue to follow the green blazes and the Coosa Backcountry Trail until you rejoin with the Bear Hair Trail again, which will take you back to the trailhead with exhausted thighs and soaring spirits. 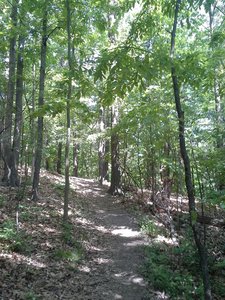