While dogs will be fine on the vast majority of this trail, the scrambling on Eolus and North Eolus are technical enough that you might have to carry Fido.

This run takes adventurers from the Twin Lakes Approach up North Eolus and Mt. Eolus - summit track. While Sunlight Peak is generally regarded as the hardest of the Chicago Basin 14ers, Eolus deserves true consideration for that title. Despite lacking moves like that of Sunlight's exposed summit block, it is extremely loose, route finding is difficult, and there's plenty of exposure to be had. Its difficulty is sustained for several hundred vertical feet, and many 14er finishers consider Eolus' difficulty to be extremely underrated. Its shorter brother, North Eolus, is surprisingly solid and straightforward in comparison.

These are technical 14ers requiring both a helmet and some know-how. As always, bring sun and rain protection. The weather in this area turns on a dime, and it's a long and slippery way down from these mountains. Fast runners should expect this featured run alone to take them 2-3 hrs, with much of that time spent on Mt. Eolus' loose rocks.

While this run doesn't have that many roots or rocks, its approach is also one of the steepest class 1-2 routes in the state. It's runnable, but just know that "running" isn't going to be any faster than speedy hiking. Once to the scrambling, running simply isn't possible.

From the top of the Twin Lakes Approach, turn left for the Eolus Group. Run on class 1 trail by some grassy boulders. Expect to pass many mountain goats. Pass by the lower lake on your right and angle left again on the trail, with cliff bands rising up to your right. The trail here is less rocky and generally easy to follow, consisting almost entirely of dirt singletrack at a moderate grade. After about 1.5 miles, you'll leave the lower basin, crossing onto a grass field with a clear trail at 13,000 ft. Your goal is to follow this trail along the cliff bands until you reach a ramp at 13,400 ft about 2 miles from the lake. This ramp provides the final non-technical bit before North Eolus and Eolus.

Turn right up the ramp and run up some loose rocks. This area is often wet. Come to a ridge on the ramp and turn left, scrambling just a few hundred feet on class 2+ rock to a notch between North Eolus and Eolus. North Eolus is to the right and is much easier and less involved. Simply scramble up easy class 3 rocks - incredibly solid and with minimal route finding required - for about a hundred feet before the terrain flattens out. Run toward the obvious summit, only about 10-15 mins from the notch. Come back down to the notch to go for Eolus.

Eolus is a fair deal harder and more imposing. First you must cross a fairly narrow section called the "Catwalk." It's about 200 ft of solid and flat rock, 10 ft wide or so, with moderate exposure on either side. While virtually idiot-proof, it somehow manages to freak out even experienced runners. Once across the catwalk, it's about 300 vertical ft to the summit. There are several options here. Whatever you do, don't go to the right of the ridge: this will involve class 4+ climbing on loose, exposed rock. Runers more comfortable with exposure and technical moves may opt to stick to ridge proper. This provides a class 4 scramble on fairly solid rock with easy route finding. There are many spots with hundreds of feet of exposure, though, so it's not for everyone.

The standard route involves staying far left of ridge proper and winding up the ledges to the left (east) of the ridge. To do this, follow grassy ledges up and to the south. There's no clear trail here, only some cairns, many of which are in places they have no business being, so exercise caution. Simply put, this route involves class 3 scrambling on boulders loosely embedded in the grass, and the route is dependent on getting cliffed out. Scramble up the rocks/grass until you get stuck, reconsider, and find another way. This continues until just a few dozen feet below the summit, after which it's more solid class 3 scrambling at a slightly steeper grade. Overall, this way's sketchy and not a ton of fun, so ridge proper is an excellent alternative for those more comfortable with exposure and technical rock.

From the summit, descend back to the Twin Lakes Approach and head back down into the basin and back to camp, or continue for the Chicago Basin 14er Grand Slam via Sunlight and Windom should weather, time, and energy levels permit.

This approach boasts incredible wildflowers. From the lower basin up to the Twin Lakes is easily one of the most beautiful areas in Colorado, and you'll pass many marmots, pika, and mountain goats who seem to agree. Once at the lakes, there's plenty of grass. Mountain goats seem to have a thing for Mt. Eolus, so expect to see tons of them as the scrambling starts.

The Eolus Group earns its name from the Greek "Aeolus," or "ruler of winds." Runers will most likely find this fitting. 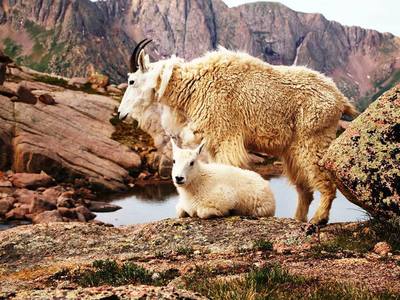 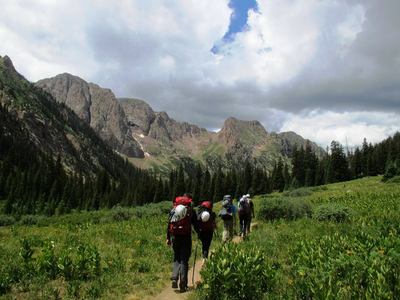 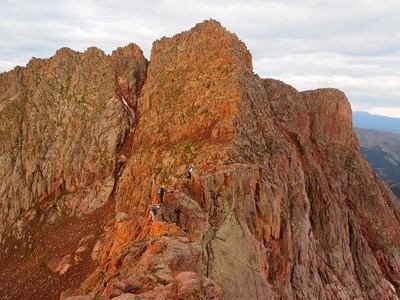 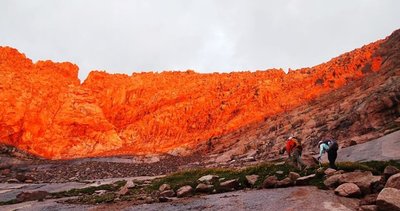 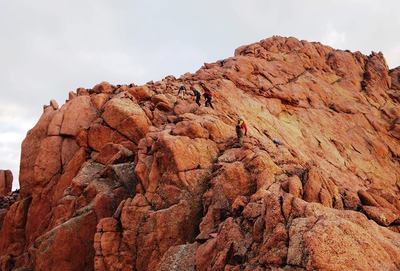 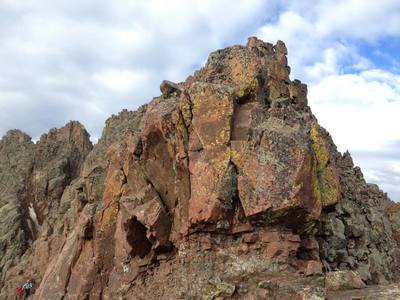 Boulder Gulch and Route 110A Loop