“A local neighborhood trail used by runners, hikers, and mountain bikers looking for a quick getaway. ” The south loop has some rough rock surfaces that have to be carefully navigated, especially when wet. Both loops cross small creeks that can run high after large rainfalls.

This park trail is great for quick trips for some fresh air or training for your next big race. It has multiple entrances, loops, and cut through trails that can make every version interesting.

There are two main loops, easily connected by a short jaunt through a neighborhood in between. The best places to enter the South Loop are from the Alsopp Park parking lot, which has roughly 4 entrances into the South Loop, two of which are currently signed. This loop can also be entered near the corner of Beechwood and Hillcrest Ave., also by a sign. The Kavanaugh Promenade has two designated entrances to the South Loop along the southernmost side of the loop, both of which has stone steps. Finally, a paved trail goes from the Pulaski Heights Baptist Church lot down to the Alsopp Park parking lot, on the opposite side of the creek from the unpaved trail on the East side of the South Loop.

The North Loop, which is much more secluded and less trafficked, can be entered at the intersection of Beechwood and N. Lookout Road at a sign, and also at a pullout with some parking near Cantrell and Alsopp Park Rd.

Each trail has several cut through trails, as well as other minor entrances to the neighborhood streets, but these are the primary entrances.

There are public bathrooms at the parking lot, with water fountains that occasionally work there and on the Kavanaugh Promenade. 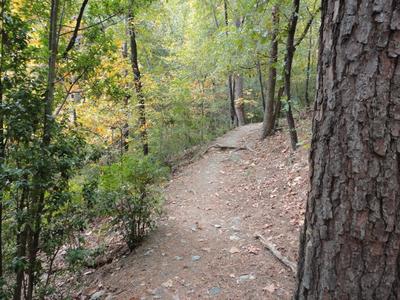