“A course through the terraced vineyards, forests and villages of the Cinque Terre National Park. ”

Trails are open year-round, but may be closed due to weather conditions or repairs/maintenance.

The course is a combination of singletrack trail, technical ascents and descents, stone-paved mule paths, stairs (A LOT!), and a few short segments of paved road. Most of the course has sea views, and it passes through all five of the Cinque Terre villages.

Expect high traffic on the coastal segments from May-October. The area is prone to landslides, and trail closures are possible during heavy rain.

The course passes through the 5 villages of the Cinque Terre, plus the hamlet of Volastra, so there are lots of places to get food and drinks.

If you need any gear, stop by Cinque Terre Trekking in Manarola.

Most sections of the trail are not groomed so watch out for rocks, roots and trail debris. There are a lot of stairs along the course, especially descending into and ascending out of the villages.

The start is in Piazza Garibaldi, in the historic center of Monterosso. After passing along the seafront to Fegina, the first ascent climbs the promontory of Punta Mesco, first on an asphalt road and then on Trail SVA (590). At the top of Punta Mesco, there is a dominating view of the Cinque Terre coast and the intersection with Trail N. 591.

A stretch of up and down singletrack leads to Colle di Gritta with views of the coastline to the southeast and also toward Levanto to the northwest. After leaving Colle di Gritta a short segment of asphalt intersects with an old mule path, Trail N. 509, to Soviore, the first sanctuary of the Cinque Terre (and one of the oldest in Liguria).

Another short segment of asphalt leads to Trail N. 582, singletrack through Mediterranean scrub with breathtaking views over the sea, that descends near the sanctuary of Reggio, then climbs steeply, via Drignana on Trail N. 508 , to Trail AV5T, the Alta Via (high path) of the Cinque Terre. The Alta Via reaches the highest point along the SciaccheTrail course, just below the summit of Monte Malpertuso, at 750 metres above sea level, and continues on to Colle del Telegrafo, the furthest point west on the course.

From here the course descends on Trail SVA (593) to the Sanctuary of Montenero and then to Riomaggiore, the first village of the Cinque Terre. Trail N. 531, a steep stairway, leads up to the vineyards of Corniolo Hill, and then singletrack, Trail N. 532c, continues on to the hamlet of Groppo, and inside the Cantina Cinque Terre, where the course passes between the steel wine barrels and modern winemaking machinery for the production of Sciacchetra and Cinque Terre DOC wine.

From here the course descends on Trail N. 506v to Manarola, the second village of the Cinque Terre. From the outdoor gear shop "Cinque Terre Trekking", another steep stairway, Trail 6p, then singletrack, leads through terraced vineyards, then on to Trail N. 506, an old mule track bordered by olive groves. Trail N. 506 continues to the hamlet of Volastra and the Sanctuary of Our Lady of Health. This is the area with the highest concentration of cultivated vineyards, characteristic of the Cinque Terre.

From Volastra, Trail N. 586, singletrack through the vineyards over the sea, then Trail N. 587, leads to Corniglia, the 3rd village of the Cinque Terre.

From Corniglia, the course follows Trail SVA (592) through Vernazza, the 4th Cinque Terre village, and on to the finish line of SciaccheTrail in Piazza Garibaldi, Monterosso al Mare, the final village.

Along the trail, you'll pass through chestnut and pine forests, Mediterranean scrub, olive groves and vineyards on the terraced hillsides. You may come across wild boar, deer, lizards and a variety of birds.

One thousand years ago the laborious work of terracing the rugged, steep, seaside cliffs of the Cinque Terre began. Over centuries, roughly 7,000 km of dry stone walls were built and planted with grapevines and olive trees. The extensive trail network was built as transportation routes through the terraces, connecting the five villages of the Cinque Terre and linking them with the Vara Valley to the east. 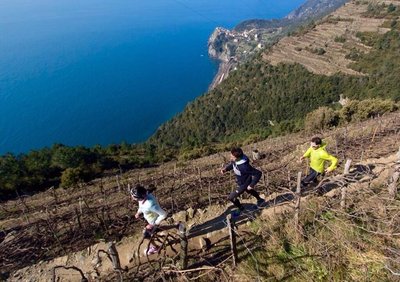 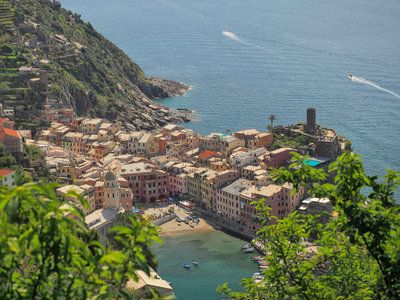 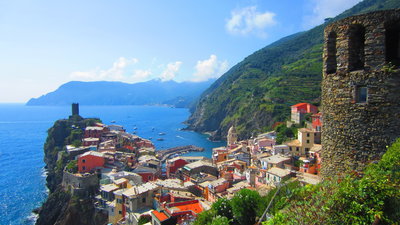 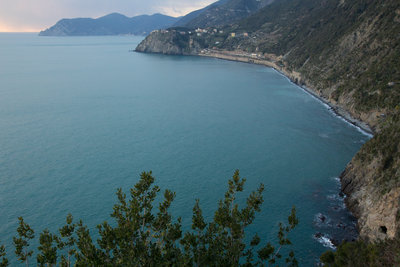 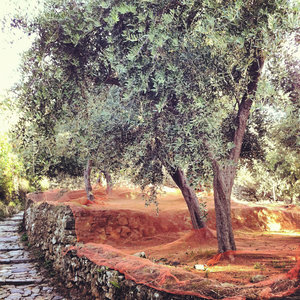 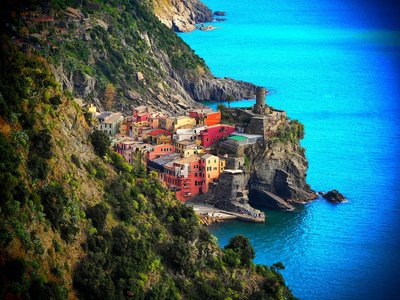