“A rough and hilly run with lots of views. ”

For being in the greater Boston area, this trail is surprisingly hilly and has a unique remote feeling. Without a doubt, this route is on par with the best trails in the White Mountains.

Lots of rocks, roots and scrambles.

Starting at the trailside museum parking lot, follow Eliot Path with red markers. Right away, the trail gets steep with stone steps and slabs. Halfway up the Great Blue Hill you cross a local road. The trail evens out for a bit here but immediately becomes steep and rough again until you reach the summit and its associated observation tower.

From here you'll switch over to the Skyline Trail (blue markers) where it gets steep downhill with slabs, rocks and stone steps. The route crosses another trail and quickly goes up Wolcott Hill, which is a scramble. From there, the trail continues up and down Hermenway Hill and Hancock Hill, with a few more scrambles and some shorter flat sections with viewpoints. The last part down to the park headquarters is steep downhill with slabs and roots.

Turn right to Skyline Trail South Follow the road for a short bit before going into the woods. There it quickly gets steep with stone steps and some short scrambles to the top of Houghton Hill. From here, it goes slowly downhill with a few small uphill sections, crossing some other trails along the way. The terrain is rocky, with roots and some slabs and two smaller brook crossings. Eventually, the trail becomes a steep uphill back to the Great Blue Hill using stone steps. The trail gets rockier with some scrambles and finally finishes at the summit.

After taking in the views from the summit, head back down following red markers. Using Coon Hollow Path stroll downhill as you dodge bigger rocks this path offers. At the junction, turn left on Cliff Trail. It's flatter with rocks and roots and then becomes more downhill until it crosses the Summit Rd. From there, follow Trailside Path, which is still marked by red markers. Its all downhill from here, with rocks and roots until you join with Eliot Path. 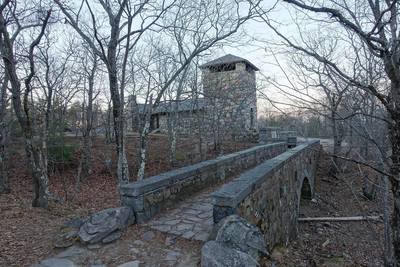 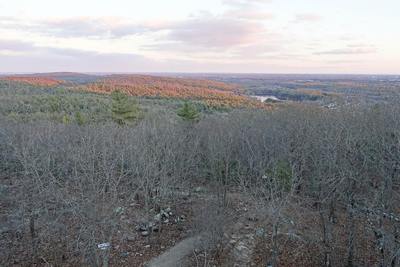 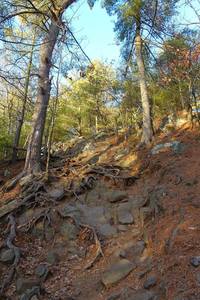 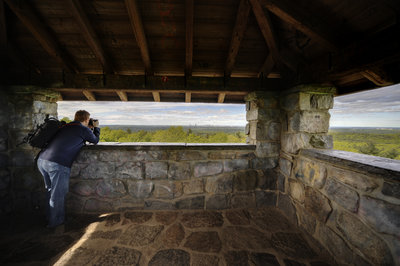 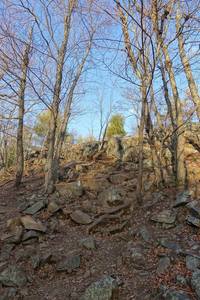 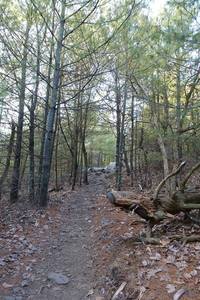