“Circle a volcanic crater tens of thousands of years old where astronauts once trained. ”

Kilbourne Hole is a maar volcanic crater, created by a volcano that erupted in a rare steam explosion without creating a mountainous rim. Over a mile wide and three hundred feet deep, it is circled by a sandy, rarely-used 4x4 trail that looks into one of the most unique and little-known features of the southwestern American desert.

The trail here features some brief up and down sections as it follows basalt cliffs along the crater rim. Sandy portions of the trail require endurance and perseverance; the loop feels longer than the eight miles that it measures. With no shade, no water, no facilities, no cell phone reception and the entire area typically all to yourself, this is a true desert run.

If driving to Kilbourne Hole from El Paso, ignore the southern route that Google Maps and other direction programs recommend, as it is poorly marked and easy to get lost. Instead, begin your routing from the Santa Teresa Airport. Continue west along Airport Rd, crossing over the train tracks and turning right on the dirt road at the end of the trainyard. Take the first left, crossing back over the tracks and joining A-12, following the tracks to the northwest. A sign for Kilbourne Hole is posted at the next left on A011. This road will take you all the way to the parking area as depicted on the map.

Note that A011 is a single lane dirt road, with an sand embankment on both sides roughly three feet tall. If you're not in a four wheel drive vehicle and you meet opposite direction traffic, one of you'll be driving in reverse for some time.

While only thirty miles from El Paso, Kilbourne Hole is a remote desert location. There is little to no cellular reception and facilities do not exist. Before running here, make sure that others will know your location and when to expect your return. Bring plenty of water, and in summer months, avoid the mid-day desert heat. If possible, run with a partner or group for safety.

As a remote Bureau of Land Management property, there is no official trailhead, let alone parking, for the Kilbourne Hole trail. The most accessible location is off of Route A011 on the southeastern section of the crater. A flat area with tire tracks and litter north of the road will mark the best place to park. Scrambling about thirty feet to the elevated crater rim and the depicted start of the trail will be required; driving further west, the trail can be accessed closer to road grade.

Once on the rim, the trail is straightforward and easy to follow, circling the crater and rarely moving far from the rim. Outstanding views of the maar and basalt cliffs are present throughout the trail. Ascents and descents are generally gradual and brief. The challenge in running around Kilbourne Hole is navigating the sand. While not as loose or deep as a beach, the path here is less solid than hard packed dirt and saps energy at a faster rate than a typical trail.

Following the route to the north, eventually Kilbourne's lowest depression comes into view. After recent rains, a lake will sometimes form here, though it doesn't last long in the desert heat. The trail is consistent as it circles to the west side of the crater, moving further away from the rim at points due to eroded cliffsides. Reaching the southwest portion of the trail, it briefly joins the road before splitting off again. A separate dirt road descends into the crater here, though the BLM website notes that portions of the interior are private land. Continue along the trail, pausing at one of the two southern viewpoints for a final view of the crater before returning to the starting point.

The area around Kilbourne Hole does not have a great variety of vegetation.Mainly creosote bushes, cacti , lechuguillas , mariolas and some mesquite trees. Jack rabbits and snakes can be present.

Kilbourne Hole is part of the little-known Portillo volcanic field, stretching across portions of New Mexico and Chihuahua states. Created between 24,000 and 80,000 years ago, the crater formed when magma heated groundwater to forceful pressures, creating a steam explosion. This type of shallow crater is called a maar, and other examples can be found in Patagonia, Auckland, and the Seward Peninsula in Alaska. A second, smaller maar, Hunt's Hole, is located two miles south of Kilbourne.

Due to its unique nature and resemblance to craters on the moon and Mars, astronauts from Apollo programs 12 through 17 visited Kilbourne Hole as part of their geology field exercises. Today it continues to be used for training and scientific purposes; among those, the U.S. Border Patrol conducts helicopter training operations around and inside the crater. 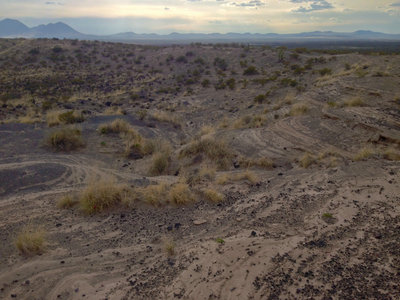 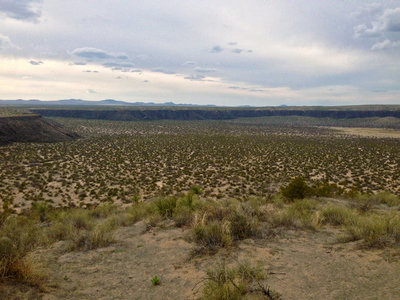 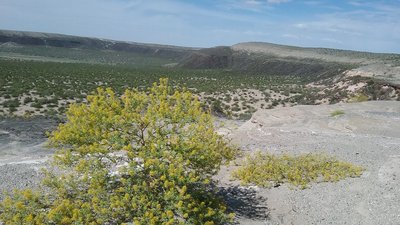 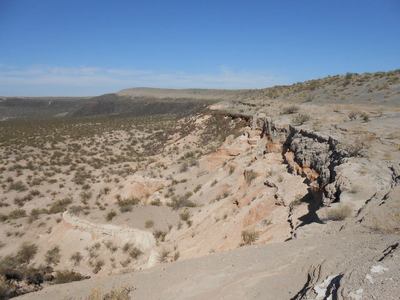 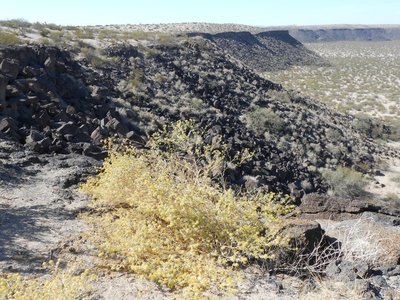 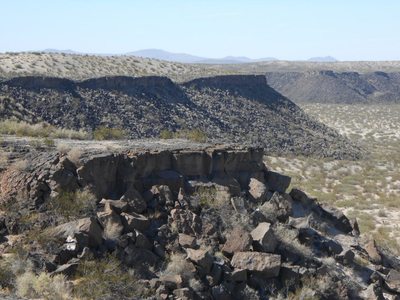