“A strenuous, but pleasant climb along flowing streams and colorful woodlands to views atop Low Gap. ”

From the trailhead at the parking lot, the Low Gap Trail eases out on a level course following Cosby Creek upstream, first skirting the lower end of the campground’s outdoor amphitheater before crossing a footlog spanning a small feeder stream. Eventually, the Cosby Nature Trail exits on the left.

After continuing up Cosby Creek, the trail crosses two footlogs before meeting the upper end of the Cosby Nature Trail merging in on the left where the Low Gap Trail leaves the stream and begins winding through a hummocky terrain shaded by large eastern hemlocks. A hundred yards beyond the stream crossing, the Low Gap Trail intersects the Lower Mount Cammerer Trail, turning left to follow it for twenty-five yards before exiting on a narrower track into rough boulder-strewn terrain.

Above the intersection with the horse trail, the Low Gap Trail continues as a narrow graded track to a footlog spanning Cosby Creek. Beyond the stream, the trail joins its counterpart from the picnic area. From here, the trail follows closely along Cosby Creek for only a short distance before easing away and resuming a winding course among the boulders where the steepness is somewhat mitigated by a series of switchbacks.

After a while, the trail enters a small cove where it passes a spring that forms the headwaters of Cosby Creek. The trail then angles obliquely across the face of the mountain, climbing almost a half-mile before easing into Low Gap, a deep V-shaped notch in the main Smoky divide. Here, the Low Gap Trail intersects the Appalachian Trail before beginning a 2.5-mile descent into Walnut Bottom on Big Creek.

Cove hardwoods yield abruptly to a closed oak association of pignut hickory, red maple, sourwood, black gum, yellow birch, chestnut, and northern and white oak as the trail climbs to Low Gap. Eastern hemlock are abundant along the lower portions of the trail. 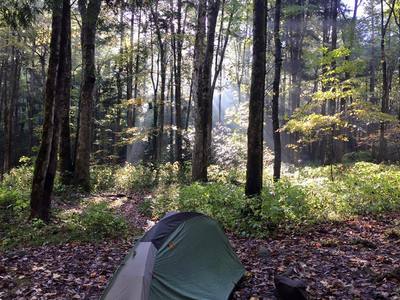 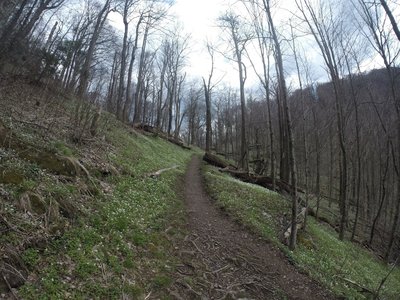 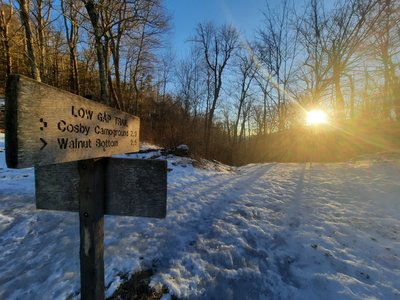 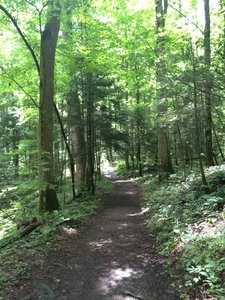 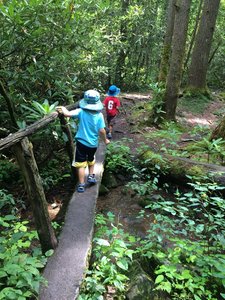 May 18, 2019
Corey Holt
Descended the trail coming from Snake Den Ridge and the AT. It was dry, smooth, and remarkably void of people. Nice to go down instead of up! :) 3mi — 0h 36m
Apr 14, 2016
Corey Holt
A decently traveled but nice quite trail (as are most in Cosby). Pretty common way up to Mt. Cammerer from Cosby campground.