Tom Mays Unit is open from 8 am to 5 pm daily. Off-hours access is permitted and is via a small parking area at the gate off of Transmountain. Overnight camping is available.

A ranger station, usually only staffed on weekends in the warmer months, is located a mile inside the entrance. Adult entrance fees are $5 per person or $2 in groups; children 12 and under are free. When the station is not staffed, use the pay box next to the station.

The Sunset Loop is comprised of three of Franklin Mountains State Park's best trails. With some technical sections and steep climbs, it makes for a challenging course, but it rewards runners with impressive views and the chance to see unique desert plant life.

Several possibilities exist to make a run longer or shorter. There are two shortcuts which can cut the loop down to 4.6 or 6.7 miles, and adding distance on via the Bike Loops can take the run well over the half marathon mark.

The standard rocky terrain of the Franklin Mountains trails is found throughout the loop, with some particularly challenging talus areas on the Schaeffer Shuffle. Cacti are generally trimmed back from these well-maintained routes. The section of Lower Sunset near the northern parking lot occasionally suffers from washout damage after strong thunderstorms, but it is usually repaired within a few days.

Expect to see the occasional runner on Upper Sunset or Schaeffer Shuffle. Both are generally inaccessible to cyclists. Encounters on Lower Sunset are uncommon.

There is no shade on these desert trails. If visiting between spring and fall, avoid the hotter parts of the day.

El Paso is in the desert, so plan around the climate. Summers are regularly in the 90's or above; winters will drop to the 30's and 40's. Lightning storms are frequent in the late afternoons during the warmer months. Winds are frequent, and gusts over 50 mph are not unusual. Dust storms in the late spring can be hazardous and reduce visibility to less than a quarter mile. Check the weather before you go, and let someone know where you will be.

This loop trail can be completed in either direction, with the decision mostly being based upon when to take on the steeper climbs of Schaeffer Shuffle and Upper Sunset. The route as described here places both in the latter half; runners wanting to break up the challenging segments could start from the parking lot at the northern end of the park access road.

The run starts on an easy, gravel doubletrack at the start of Lower Sunset. After a half mile, it turns north and begins in earnest, narrowing to a rocky bike path and descending to its low point. The trail is moderately technical up-and-down segments as it traverses the valley until the two mile point, where it turns east and begins a long climb towards the foothills. The first shortcut back is found at the top. Desert plant life is thickest through these first few miles, and runners visiting in late spring will have the best opportunity to see different kinds of cacti in bloom.

Lower Sunset then turns out west along a scenic cliffside singletrack with views of western Texas and the Chihuahuan Desert. This is one of the best trail segments in the state park. As it circles back to the east and enters another valley, watch for a wooden structure and trail marker on the right side of the trail. This marks the western entrance to Schaeffer Shuffle.

Be prepared for a short but difficult climb to the top of this mile and a half segment. Some sections can be slippery with loose rock. Be sure to turn around and catch the view from the top if running clockwise. Use caution on the descent as well, as much of the eastern side is made up of talus chipped off after millennia of erosion.

The run rejoins Lower Sunset before ascending back to the park access road and the starting point of Upper Sunset. A rewarding finishing segment, this singletrack traverses the western ridge of the Tom Mays Unit and runners can see well into old and New Mexico from several points. The trail tops out at a mile above sea level and finishes with a steep, sometimes technical descent back to its starting point.

Desert plants tend to bloom in waves in spring and summer after the short periods of rain that El Paso experiences. Ocotillo tend to turn green and blossom first, followed by barrel and claret cup cacti and finally flowers and prickly pears.

Animals are mostly limited to jackrabbits, lizards, and small birds. Roadrunners will dart across the trail at times, and hawks circle overhead, looking for prey. Coyotes are hard to spot and tend to only come out after dusk, though they leave runners alone.

Keep an eye out for snakes. They avoid the hot desert sun and are more common during the winter months. Most are harmless, but rattlers are a part of the local wildlife. Give them a wide berth. 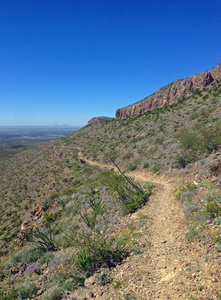 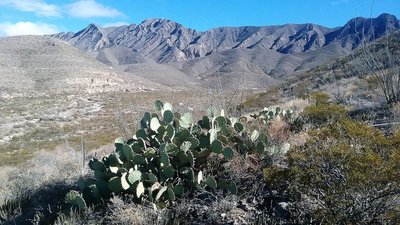 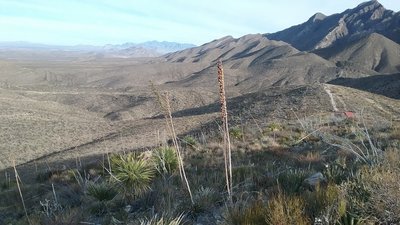 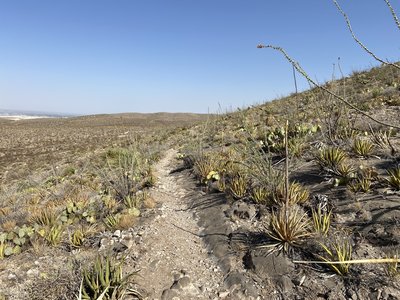 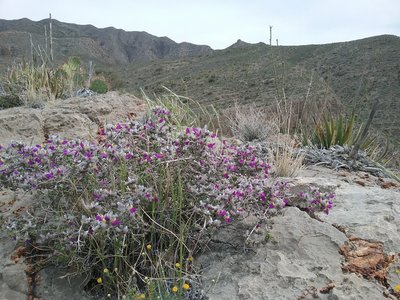 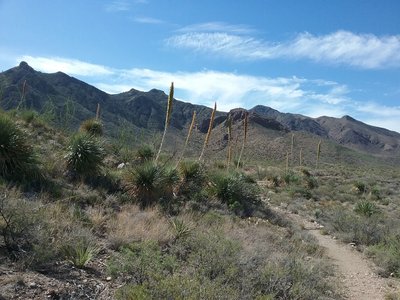