“A strenuous descent from Pinnacles Overlook with views of old homesites ending at Nicholson Hollow. ”

The trail starts through an opening in the wall at the north end of the overlook. It falls along the ridge top with a couple switchbacks, and has a nicer tread than most of the blue-blazed trails. For a stretch of this run, you can see the results of the 2000 fires. Around a half a mile from the start, at the right side of the trail, is a pretty unusual "deer" tree - a result of damage that occurred a few years ago during an ice storm. The trail continues downhill, with a few brief and easy climbs to head around two knobs on the ridge crest.

After about a mile from Skyline Drive, at a concrete marker post, the Hannah Run Trail bends ninety degrees to the right, at the junction with the Catlett Mtn Trail. Up to now, the trail has been fairly new and is periodically cleared for park visitors. Heading further, however, the trail transitions back into an old mountain trail, leading to the first homesite and then what used to be a road.

After you turn right at the junction, the trail is almost level until it begins to descend, gradually and then much more steeply. The next few hundred yards are steep and slippery. Descend to Hannah Run and then ascend the ridge on the other side. Go around forty yards more, and look out for the piles of stones off to the right. These are all that remains of an early building here.

After another forty yards, the trail makes a quick left turn, at the corner of another former homesite. Similarly to the first, all that remains is the stone foundation.

The next former homesite (lost in a fire) is two-tenths of a mile further, off to the left. It's smaller and older than the first. After another couple hundred yards, look for the third and oldest ruin. Only the chimney and some stones from the foundation remain.

From here, it becomes more apparent that the trail follows an old road. There are numerous piles of rocks on both sides of the trail that mark locations of previous fences, outbuildings, and homes. This is a delightful stroll as the surrounding woods are open with views and some good sized trees. Hannah Run is down a small ravine on your left. The grade of the trail is gentle.

A mile and a half from the final ruin, the Hannah Run Trail ends at the Nicholson Hollow Trail. Heading right, it's a little over two miles to Corbin Cabin, and just under four miles to Skyline Drive at mile 38.4. To the left it's two miles to the Weakley Hollow Fire Road.

Thanks to Larry W. Brown, for sharing this trail description. If you’re interested in learning more details about great runs, weather, camping / lodging, wildlife, and scenic drives, check out the comprehensive Guide to Shenandoah National Park. 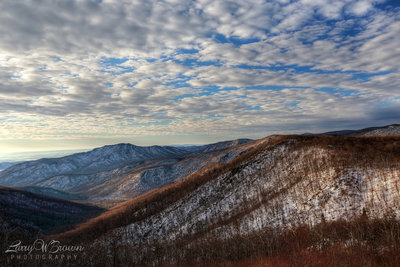