“Switchback up a mountain straddling the international border on El Paso's most unique trail. ”

Closed until further notice. This trail is on private property - please obey all no trespassing signs. See mtcristorey.com/ for current closure information.

Pets are not allowed.

A few miles across the Rio Grande from the extensive trail system of the Franklin Mountains State Park, Mount Cristo Rey is the Borderland's most unique -- and potentially risky -- trail. It is mainly a series of switchbacks up the side of a seven hundred foot tall mountain straddling the border between the United States and Mexico.

At the top is a twenty nine foot limestone statue of Christ, sculpted in 1939. Stations of the cross and various shrines are present along the well-maintained path. The view of both countries from the summit are incomparable; there is no better place to fully appreciate the enormous size of the El Paso - Ciudad Juarez borderplex and surrounding desert.

Due to the terrain, the border fence is interrupted along the base of the mountain on the Mexican side, so there are Border Patrol units at the trailhead. With this in mind, trail users need to take extra precautions when visiting Mount Cristo Rey. Security is present during events, but those are also difficult times to use the trail due to the large number of people. Traveling with a partner or group is usually enough to discourage trouble. A new annual race in spring will be the perfect opportunity to visit.

In any case, visitors are requested to contact Sunland Park Police Department at (575) 589-0388 before embarking as an extra measure of security.

In comparison to the rocky trails of the Franklin Mountains, the well-groomed doubletrack of Mount Cristo Rey is smooth and easy to run on. Part of this is out of necessity; some adherents will conduct their pilgrimage to the top entirely on their hands and knees.

Remember that this site was built as a religious monument. Most worshippers are happy to share the trail with runners and hikers, but please be respectful to maintain this relationship. Running the trail may be difficult and inappropriate on busier pilgrimage days. Mountain biking is not permitted.

Mount Cristo Rey's trailhead is marked with a large yellow arch. The entirety of the trail is a smooth, gravel doubletrack, a significant improvement over the typical rocky trails of El Paso.

The initial quarter mile is the steepest, climbing at a moderate grade as it enters the small foothill area. Watch for the first few stations of the cross (part of the Catholic Via Dolorosa, meant to reflect upon the final days of Christ's life) on the way. The trail flattens as it makes its first of many hairpin turns, also passing the first shrine. Keep an eye off the trail to the right in this flat area; the walls of Urbici Soler's house, who built the monument on the top, can be seen below the path.

The trail is mostly flat as it transitions the foothill area, surrounded by boulders and creating a moon-like landscape. A short diversion to another shrine is present at the three quarters mark, just as the trail makes its first major switchback up the mountain. From here until the top, the grade will stay at a manageable five to ten percent. Impressive views into New Mexico and western Texas are present throughout the climb. A few sidetracks leading to shrines or cross stations are present along the way, but the main path is easy to follow.

The last major hairpin is just after the two mile point. While still in the United States, the trail is now on the Mexican side of the mountain and looks over an area of Ciudad Juarez that can't be seen from any other vantage point in the country. From the neighborhoods below, music, conversation, and the rare gunshot can be heard.

The final section is marked by yellow railings and a steep, concrete path to the Christ monument. Be respectful summiting the top, as other visitors may be engaged in prayer or quiet reflection. The view from the crown-shaped base of the statue is peerless. Over two million people reside in the cities surrounding the trail. The mountains, Rio Grande, and border fence reach out to the horizon, all impacting life in the Borderland in their own way.

In contrast to the trails of Franklin Mountains State Park and the plantlife surrounding the nearby Rio Grande, Mount Cristo Rey is almost totally devoid of vegetation. A few lonely sotols grow on the lower part of the trail, and some creosote bushes can be found scattered around. This, combined with the countless boulders surrounding the path, gives the trail an other-worldly feel.

Originally named Cerro de Los Muleros -- Mule Driver's Hill -- the monument which became Mount Cristo Rey found its beginning with a local priest, Reverend Lourdes Costa. Costa led a small parish in the Smeltertown neighborhood along the Rio Grande at the base of the mountain. Unaware whether it was located in Texas, New Mexico, or Mexico (parts are in all three), Costa convinced the El Paso bishop to purchase the land for the construction of a tribute to Jesus Christ. A twelve foot wooden cross was placed at the summit in 1933, but Costa was unsatisfied and continued to press the local government and diocese to create a full fledged religious site.

The trail, along with a larger cross, was built by volunteers in 1934. Costa's plan reached fruition in 1937, when Mexican sculptor Urbici Soler was hired to build the Christ statue from limestone quarried in Austin. Working daily from 4 am to sunset, Soler completed the monument in time for its first pilgrimage in October 1939. 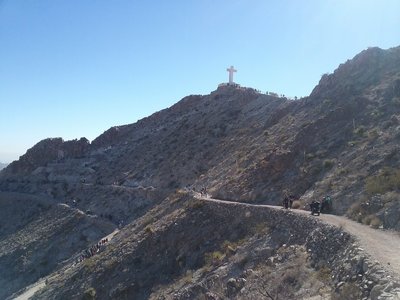 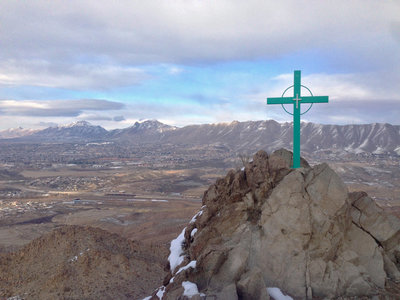 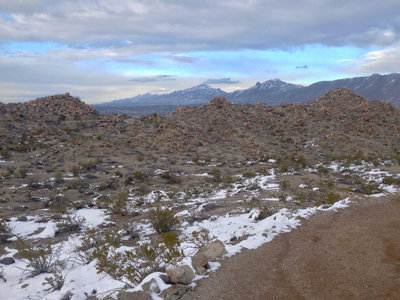 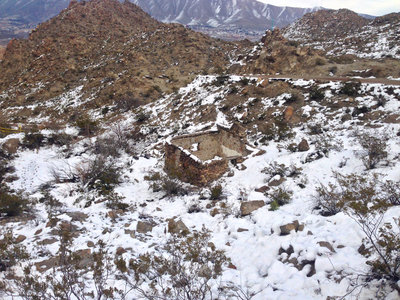 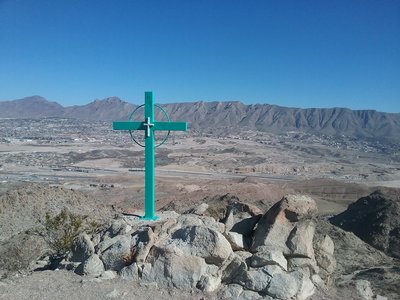