**Please read and understand this disclaimer before running the Oregon Desert Trail.**

This segment follows the general north-south escarpment of Diablo Rim. There are a few marginal water holes that are well used by cattle, wild horses, and wildlife at the south end of the section, but nothing reliable. Not a single tree was found on this segment. Views from the rim and from Diablo Peak are fantastic -- the highlight of the segment.

This is a difficult section with quite a lot of elevation gain, and mostly cross-country terrain exposed to the wind, sun, and maybe even rain. On some of the high ridges, a certain amount of rock scrambling is needed to get up or down to the high points.

This is an abbreviated description and only includes references to a few key waypoints (also shown on the map). Section mileages shown here may differ slightly from the ODT guidebook. A full description of the route can be found in the Oregon Desert Trail Guidebook

For more info and to download ALL of the waypoints for the ODT, visit ONDA.org

This is a difficult section with quite a lot of elevation gain and mostly cross-country terrain exposed to the wind, sun, and maybe even rain. Water sources are unreliable until reaching the town of Paisley which has all services.

Starting at the two-track BLM road 6144-0-00, the ODT climbs then drops south-southeast to a fork and takes the right (southwest) branch for about a quarter mile. The trail leaves the two-track road system (WB042) heading west-southwest cross-country for 10.9 miles, and after crossing an open flat area climbs a steep slope to the southwest. The sagebrush, rabbitbrush, and hopsage are not too tall or thick for this cross-country section, but the real difficulty comes from all the rocks. The ODT continues south across a bench and begins to climb again. At the next bench, the ODT is directly west of Murphys Lake which is about a thousand feet lower and not near the trail; it is just mentioned for reference.

From this bench, the trail climbs steeply to the south-southeast to reach the summit of Diablo Peak. There is a small amount of rock scrambling at the top, and it may be worth doing without a pack if one is concerned about balance. From this high point, Summer Lake and Winter Rim are seen to the west, the rest of Diablo Rim stretches to the south, and to the east is wide-open, buckled high desert. Weather can move in quickly along the Diablo Rim, and one does not want to be caught on Diablo Peak or on the rim during a storm.

Heading southeast from the peak, the ODT drops steeply and then follows the high points along the Diablo Rim, with small climbs and drops in between. Some of the climbs involve rock scrambling where there is exposed rock. Despite the open terrain and low vegetation, this is a rugged stretch of the trail. Eventually the rim-walking arrives at a high point where the ODT turns more southerly away from the east rim and drops through taller sage and scattered great basin rye to a rough two-track road (WB058) and follows this to the southeast to the Between Rim and Inter-Mountain water holes (WB061 and WB063; cow-water if any at all, unreliable).

Towering to the south above this second water hole is the rock formation Sharp Top. The ODT continues on the rough two-track road from the south end of Inter-Mountain Water hole - -the actual roadbed becomes faint -- as it passes by the eastern base of Sharp Top and descends south to Giant Water hole (WB067 possible water cache spot). The ODT follows the two-track road here to the southeast and takes the right (south) fork. This two-track crosses through a fence at the unreliable Rocky Water hole (WB070), and meets up with a major dirt road shortly after. The ODT follows this road south and east for several miles as it descends through Sand Hollow and passes the ZX Ranch operation, arriving at the paved Highway 31. The Chewaucan River and Paisley (WB078) are less than a mile to the south. 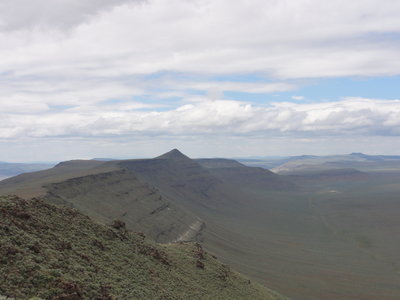 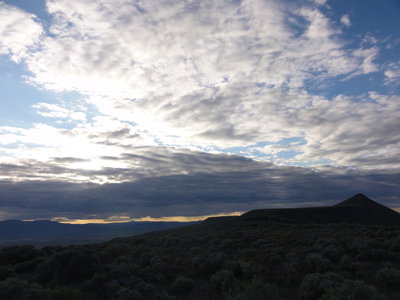