“Run in the footsteps of John Muir and experience amazing peaks, lakes, canyons and granite cliffs. ”

The John Muir Trail offers runners an opportunity to explore the backcountry without having to take several months off work. If you are running South Bound (SOBO) this run starts in Yosemite National Park and ends in Sequoia National Park as you summit Mt. Whitney, the highest point in the contiguous United States.

Runners will see the best of Yosemite National Park, Kings Canyon National Park, Sequoia National Park, Devils Postpile National Monument and the Ansel Adams Wilderness. The JMT will take you over six mountain passes with elevations over 11,000 feet with a total trail elevation gain of 47,000 feet! It is important to note that the typical runner will take around 21 days to complete the JMT as a through journey.

The summer season for running the JMT generally spans from July through September (though this will depend on the previous winter's snowfall). The majority of runners will start their JMT journey from Yosemite National Park. If you are starting in Yosemite Valley, don't be surprised to see large numbers of people traveling to the top of Vernal Falls (the first 2 miles of the run). This is an extremely popular day trip! For runners traveling North Bound (NOBO) ending the trail in Yosemite Valley the crowds can be overwhelming after being on the trail for several days.

The John Muir Trail is the same path used to run to the top of Half Dome. Once the trail splits from the Half Dome route, the crowds become more manageable. It is not uncommon for runners to spend their first night around the Clouds Rest Trail cut off (about 7.5 miles from the valley floor) so runners might find this section impacted. Runners will encounter countless switchbacks on the JMT, but the trail is well maintained.

If you are planning a through trip, resupplying will be required! Pacific Crest Trail Association does a great job listing the resupply options for the JMT. Both Red's Meadow and Vermillion Valley Resort offer fresh cooked meals and have small stores.

The trail will lead through the forest, meadows, and lakes along this run. You may find deer, marmots, and even bear.

The trail was the brainchild of Theodore Solomons. As stated on the Pacific Crest Trail website "Exploring and mapping of the High Sierra was done in the late 1800′s by men like Theodore Solomons, Bolton Brown and Joseph LeConte. Solomons has been referred to as the "father' of the JMT and was quoted as saying "the idea of a crest-parallel trail came to me one day while herding my uncle's cattle in an immense unfenced alfalfa field near Fresno. It was 1884 and I was 14." The PCT's website further highlights, "John-of-the-mountains, as he was sometimes fondly referred to, was inarguably the most influential man in the history of the Sierra and its wilderness. His influence transcended his death, and in 1915 the Sierra Club won California legislation appropriating the first $10,000 for the construction of the John Muir Trail. Twenty-three years, and many man-hours later, the trail construction was completed in 1938; the year of the 100th anniversary of John Muir's birth." 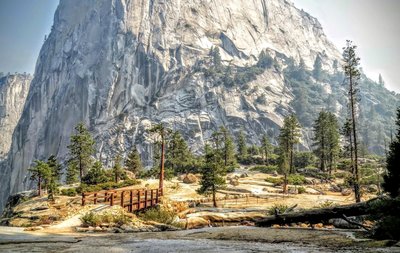 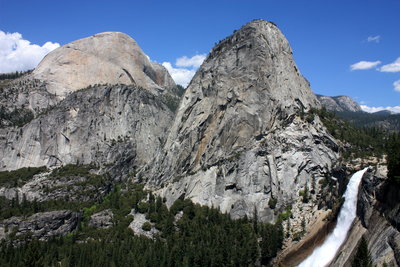 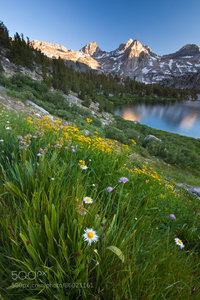 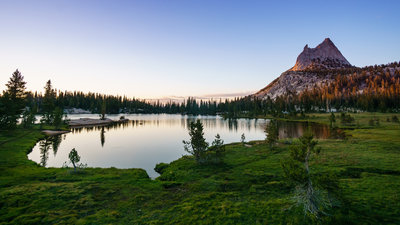 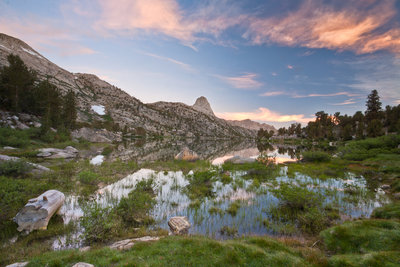 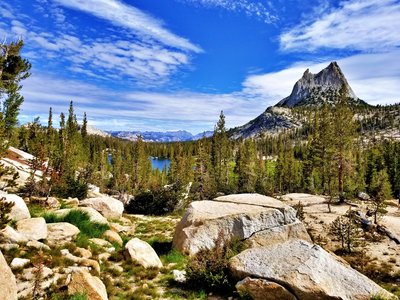 North Dome Out and Back