“A 7.3km trail and bush run in the middle of Wellington city. ” The close proximity to the city make this an awesome location to spend your lunch hour. Breaks in the bush provide panoramic views back across the city. There are options to extend the run and head to the Brooklyn Turbine or Zealandia loop.

There is an awesome local brewery or cafe at the entrance for post-run coffee, cake, or something more refreshing.

There are lots of access points. You could start from any of the following locations:

This loop starts at the small grassed area on Aro Street just before Holloway Road. Look for the Polhill Reserve sign. Towards the rear of the grassed area, you'll see a sign pointing to the Transient track. Take this track uphill through the regenerating native bush. You'll come to an open, grassy area near a power pylon. Carry on uphill, and you'll see another sign pointing you further up the hill.

You are now running through an open area. You'll come to a junction with a sign that says Transient; go straight ahead into the bush following directions to Brooklyn Wind Turbine.

You'll run over a bridge and two boardwalks and come out of the bush to a view of the harbor.

Keep an eye out for the native birds, including tīeke, toutouwai, hihi and kākā. When you come to the Zealandia / Karori Sanctuary fence line, turn right and head down the dirt road to George Denton Park Play Area. Run across the park to where a track will take you downhill through the bush and out to Holloway Road. Turn left and run back to Aro Street where you started or try the other way round.

Keep an eye out for the native birds, including tīeke, toutouwai, hihi and kākā. Plenty of regenerating bush.

During the Second World War, there was a small panic about the possibility of a Japanese invasion. The result of this was the construction of gun emplacements on various Wellington hills. The bunkers on Polhill are fairly small, but their bigger brother on Wrights Hill is impressive. It is easy to run to Wrights Hill from here since there are many fine bush tracks dropping down to the upper Karori Reservoir (now mostly empty) and up the other side of the valley.

in George Denton Park and… 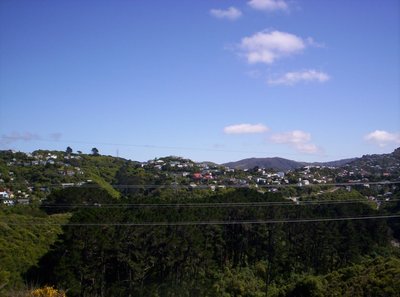