A section of restored Historic Columbia River Highway State Trail that opened to the public in 2000, giving visitors access to a smoothly paved trail that allows countless views of the Columbia River along gentle grades. The trails namesake tunnels are located less than a mile from the East trailhead.

A great paved run with views along the way. This is a popular multi-use trail so practice good trail etiquette and consider walking through the tunnels.

This trail can be traveled in either direction as a shuttle or an out-and-back. From the east, the trail starts along the shoulder of Rock Creek Road before shortly crossing over to the old highway. Past the gate, the trail crosses through a large boulder field dotted with pine trees. The edge of the gorge is soon reached and the trail continues west, paralleling the river.

From the stone guardrail you'll get your first glimpse of Eighteen Mile Island Below. Ahead, a stone-walled lookout on the edge of the gorge provides an even better view. In April and May the grassy area around the lookout brightens with several types of wildflowers including balsam root.

Directly beyond the lookout is the entrance to the east tunnel. The combined length of the tunnels is quite short and visibility remains good throughout. There are also a few side passages leading to windows know as adits. On the other end of the tunnels is a long structure to catch rocks. If you're looking for a shorter out-and-back option, the tunnels are a popular spot to turn around.

Beyond the tunnels the trail continues for about four miles until it reaches the Mark Hatfield West Trailhead and the visitor center there. This portion receives more moisture and is greener and has more trees as a result.

When Interstate 84 opened in 1954, the original Columbia River Highway was abandoned and these two tunnels were filled in with rock. Later the idea of reopening the old highway as a tourist destination grew and work began in 1995 to reconnect the old highway between Mosier and Hood River.

In addition to the adits in the tunnel, you'll also find milepost 72 and carved graffiti from 1921 that details the names of the party who was stranded in the tunnel during a snowstorm. 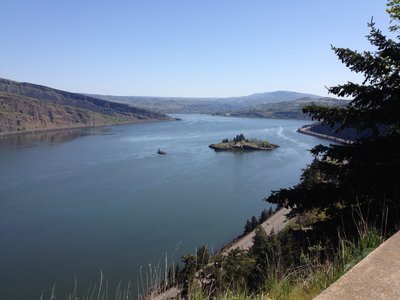 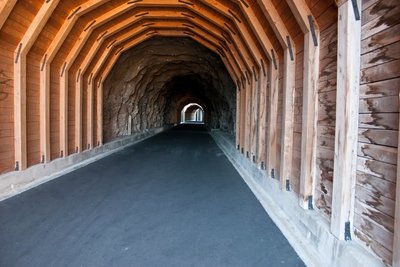