“The Jim Slagle Loop Trail is a pleasant, kid-friendly trail that ties into the Upper and Lower Sandy River Trail. ”

The trail is closed from dusk to dawn. This trail is in a City of Sandy park, and all park rules apply. No overnight camping and no campfires. No motorized vehicles. Mountain bikes are allowed. Dogs must be on leash at all times. No smoking. Please pack out any trash. Report any issues or signs of illegal camping to Sandy Police Department. Stay on the trail as there is private property adjacent to parts of the trail.

The Jim Slagle Loop Trail is a great way to access the Sandy River. One of Sandy's secret gems, this trail is much less steep or rocky than the Upper Sandy River Trail, which is an old logging road. It was designed by a famous Northwest trail designer (and local Sandy resident!) Jim Slagle. This was the last trail he designed before his retirement after 40+ years of trail design including Sandy's other gem, Tickle Creek Trail and most of the trails in the Mt. St. Helens Monument. The local youth corps AntFarm worked with local trail builder Gene Tilgner to construct the trail in 2015.

The trail starts where the Upper Sandy River Trail descends and takes a sharp left (north). Take a sharper left and head northwest onto the trail. The first section of trail was an older section of trail that was repaired. There is a large nurse stump with a tree growing out of it and then a small creek. Continue north and cross over a large culvert that is another small tributary to the Sandy River. The trail then heads east and, at a large cedar snag, there is an intersection. The Jim Slagle Loop turns to the left, and going straight ahead is the short Sandy River Midway Trail that takes you back to the logging road (Upper Sandy River Trail). From here, turn left (north). The trail crosses another small creek before coming out to a viewpoint over the river. Along this section of trail is a very large bigleaf maple tree that shades a handy snack or lunch stop.

The trail then gets into thicker cedar forests with a steep side slope. Trailside ferns and "pistol-butted" trees grow out of the slopes demonstrating the occasional landslides and loose soil. The trail drops down into an open wet area and crosses a boardwalk/bridge made from parts of the old fallen cedar tree next to the trail. There is private land adjacent to this spot, so please stay on the trail.

Across the boardwalk, the trail takes a sharp right and heads east. You then come to a dense second-growth western red cedar thicket located above the audible Sandy River. The trail then leads you to the largest tree (western red cedar) around, which makes a great photo op! Continue to its end at the intersection with the Upper and Lower Sandy River Trail. Take a left to head to the river or a right to head back up toward town. I recommend the river and returning on the Jim Slagle Loop the way you came. Shorter loops or figure-eights can be made with the Sandy River and Midway Trails.

The trail has a variety of hardwoods including alder, bigleaf maple, and vine maple. Douglas fir and western hemlock predominate, and small and large (spectacularly large) western red cedars are found in the areas near water. The trail can have deer, coyote, and the rarer large wildlife. Birds are abundant. Sword ferns, deer ferns, maidenhair ferns, Oregon grape, salal, thimbleberry, salmonberry, and stinging nettle are found on the trail – Avoid the nettle! Stinky skunk cabbage is found in wet areas. 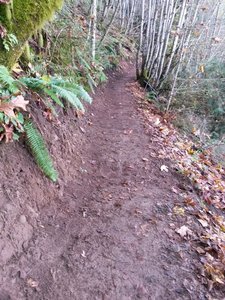 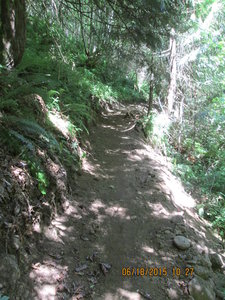 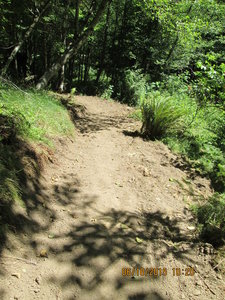 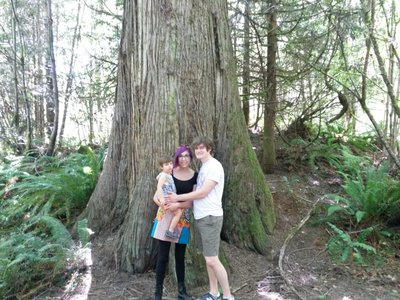 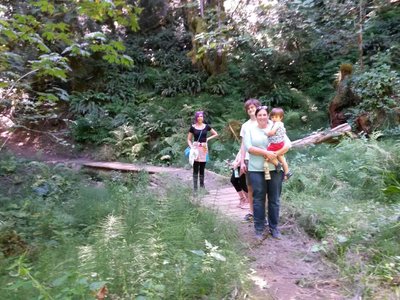 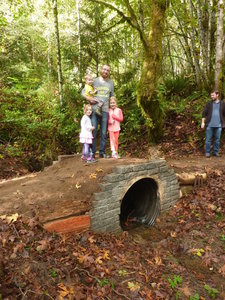