“A short, intense adventure that's one of the most unique in the area. ” This has to be the most unique experiences one can in Sedona. The trail climbs up to a saddle bisecting two large red rock formations rising out of the canyon, then continues along a knife edge right around the side of the rock, 200 feet above the canyon floor.

It can't be stressed enough that despite the short length, this is a very serious trail. Runners should be very confident in their ability and fitness, and should be comfortable with heights!

Starting from Cow Pies Trail, the trail makes its character known right away. The running, mostly on slickrock, is challenging. The first section climbing up to the saddle isn't terribly exposed. Take a break on the expansive flat saddle, eat a snack, and contemplate what's next. This is a fine place to turn around and retrace your steps if you want to get the views without the exposure that comes next.

From the saddle, the trail descends down a short section of slickrock, then becomes a dirt trail right up against the edge of the rock, which rises straight up to your left, and drops steeply down to your right. There's plenty of vegetation to the right, and it doesn't feel exactly like the edge of a cliff, but it's quite exposed. The name of the trail begins to make sense here, as the rock hangs over the trail in spots, forcing you very close to the edge.

Wind around like this for a while, looking out at the views to your right. Eventually, the trail comes away from the edge and onto slickrock. Although you're off the edge, the trail descends steeply down the slickrock. In addition to the steepness, it there are a few large steps down as it descends.

The trail becomes somewhat less exposed after this, but still quite rugged until it suddenly changes to smooth surface through dense Junipers as it returns to Munds Wagon Trail. 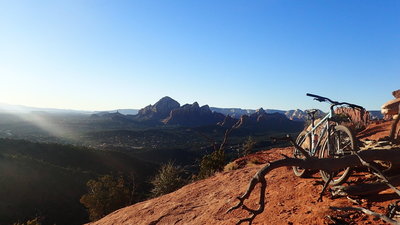 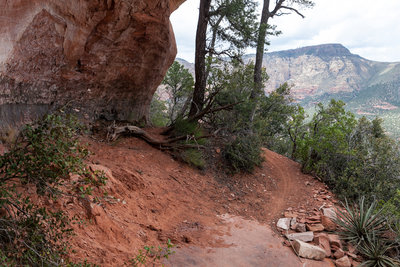