“A spectacular loop around Lower Green River Lake, with views toward Squaretop, White Rock, and more. ”

Highlights of the trail include sweeping vistas over Lower Green River Lake to Squaretop Mountain from most of the Highline Trail, especially the bridge over the lake's outlet, and views from the shoreline at the northern end of the Lakeside Trail.

The Highline Trail has the views, while the Lakeside Trail is a forest experience. While bridges exist, high creek crossings can be dangerous during high runoff / snowmelt. Early in the season, the dirt access road is accessible only with 4x4; by summer, it should be fine for most low clearance vehicles. Try to be on the trail in the evening for spectacular sunlight on Squaretop and White Rock.

From the Hiker's Parking Area near the cabin, descend to the Lakeside Trail #144 and turn left. A tenth of a mile later, the Lakeside Trail #144 turns left toward the corrals; continue on the main trail, Lakeside Trail-Highline Trail Connector. Continue another 0.3 miles to the lowest point on the loop, and perhaps one of the best views, at the bridge over the Green River Lakes' outlet. Interestingly, this is the same Green River that joins the Colorado River in Canyonlands National Park.

The trail intersects the CDT: Summit Lake to Union Pass (WY Sec. 15), #094; this section is known as the Highline Trail. Veer right, away from the Osborn Homestead and the sign for Gunsite Pass, and cross a smaller bridge before ascending slightly to work your way along the hillside above Lower Green River Lake's eastern shore.

The views are spectacular of the lake, surrounding mountains, and especially the iconic, flat-topped Squaretop Mountain, to the junction with the Clear Creek Trail #184 at mile 2.4 (note that the trail enters the Bridger Wilderness at mile 0.75). Continue straight, following the sign for Three Forks Park, and descend to the handrail-and-log bridge across Clear Creek (equestrians take the right fork and cross at a ford downstream from the bridge).

After nearly another mile, the trail intersects the New Fork-Porcupine Trail #137 (here referred to simply as the Porcupine Trail). Turn right, crossing the bridge over the inlet stream. Over the next 0.3 miles, be sure to look back at the lined cliffs of White Rock; Squaretop also makes a peek-a-boo appearance over the scrub and grasses between the two Green River Lakes.

Turn right at the next junction, following the sign for the Lakeside Trail #144. The trail for nearly the next 3 miles is through the forest, although during the last mile there are social trails down to the lake shore; in season, the shoreline can be explored in some areas. The shoreline offers good views toward Squaretop and White Rock.

At mile 6, the trail breaks out of the forest into a meadow. Work your way via social-looking trails to the road; turn left up the road, and take the trail, on right, back to the junction below the parking area.

The cabins near the outlet were settled as the Osborn Homestead in the early 1900s, later becoming part of the G.P. Bar Ranch (dude ranch / fishing ranch). The cabins were sold to the US Forest Service in 1966, and all but a couple cabins were removed. The cabin near the parking area is occasionally used for administrative purposes. 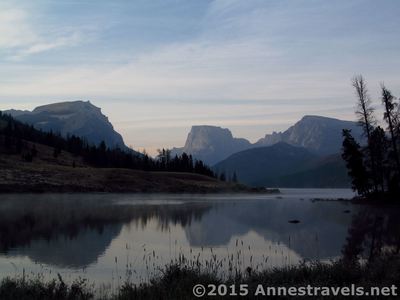 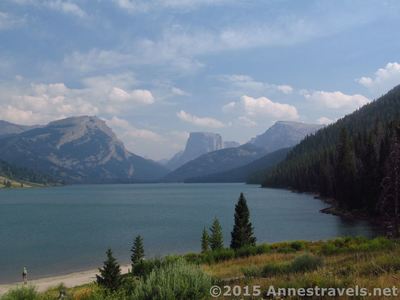 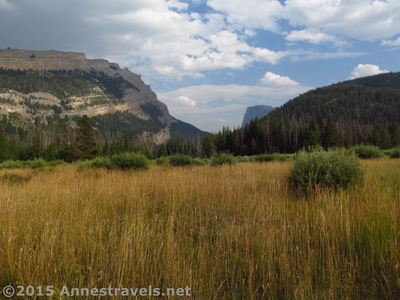