The Brown Trail forms a long spindly loop, heading from the top of Ontario County Park to the bottom and back. Most of Brown is narrow, bench cut into a steep side-slope. Expect short descents, little punchy climbs, and plenty of switchbacks.

The northern part of this trail is arguably best done counter-clockwise, climbing along the Park Drive and descending the western side parallel to the Black Trail. This fun descent places you at the trail's lowest point. Cross the boardwalk and continue onto some steep Finger Lakes-style switchbacks. Eventually, you'll reach the southernmost point in the trail network. Keep bearing left at each intersection to take the Brown Trail back if desired.

The Brown Trail provides access to the Black Trail in two places - in the northwest, near one of its highest points, and in the middle, at Brown's lowest point, just beyond a boardwalk. It also intersects the Yellow Trail in the south end of the park, providing some excellent options for loops between the two.

The southern part of the Brown Trail can feel confusing, as the trail parallels itself and the western side of the Yellow Trail. The steep side slope makes the three lines seem much further apart than they appear on a map. When in doubt, downhill on your left side usually means you're headed north towards the park, and downhill on your right means you're headed south and away from the car. 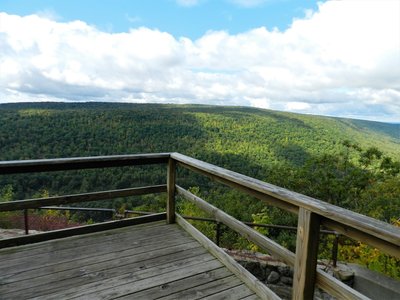