“This trail offers no warm-up. It starts out steep and holds strong until the summit, but every step is worth it. ”

The Cimarrons offer some of the best camping in this part of the state. Follow all Uncompahgre Wilderness regulations. Camping at Silver Jack Reservoir will cost you $14/night, but free dispersed camping is available all along the East Fork, Middle Fork, and West Fork roads, as well as the road leading up to Owl Creek Pass.

If Courthouse Mountain and Chimney Rock look familiar to you, it's because the two unparalleled peaks just outside of Ridgway, CO stand as a backdrop to the original 1969 True Grit, along with a number of other locations around Montrose and the San Juan Mountain towns of Telluride and Ouray.

The peak rises to a mere 12,152 feet, which, when compared to the 13 and 14,000 foot monoliths in the area, may not seem like much. But, standing guard over Ridgway with over 1,000 feet of vertical prominence, and beaming such a unique face, the mountain is one striking sight to behold. And in the sixties, it was this sheer beauty that drew filmmakers to the area.

Breaking off of the Courthouse Trail #218 after 0.6 miles, the route hooks a sharp right, delving deeper into the Uncompahgre Wilderness. Gaining on the ridge, the trees thin to your first peek at the high mountains separating us from Ouray, including the Bridge of Heaven. Despite having conquered almost half of the trail at this point, you've only gained about 700 feet, still leaving you with over 1,000 to go, and only a mile to do it in.

Honing in on a stubborn hoodoo, the trail wraps towards the eastern face of Courthouse Mountain, then swings wide, where Redcliff and Coxcomb Peaks slide into view on the far side of the West Fork Cimarron River Valley.

With the trail growing steeper still, traction becomes near impossible on the sheer, grainy slopes that lead into a boulder field. But despite a seemingly technical climb from below, a cairned route threads an easy path between the roadblocks to find access to the grassy slopes just below the summit. The final scramble through alpine tundra finds an exposed summit ridge.

From the summit, the views open up to Ridgway in the west; Chimney Rock and Silver Jack Reservoir to the northeast; the Uncompahgre Valley to the northwest; and directly to the southeast lays the West Fork Cimarron River Valley, trapped by the high peaks of Dunsinane Mountain, Precipice Peak, Redcliffe, and Coxcomb.

You may spot the occasional deer, mountain goat, bighorn, or bear along this trail. Near and above treeline, a vivid display of wildflowers blanket the high-alpine meadows. 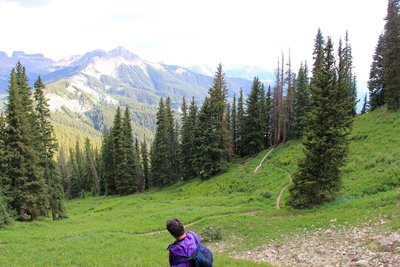 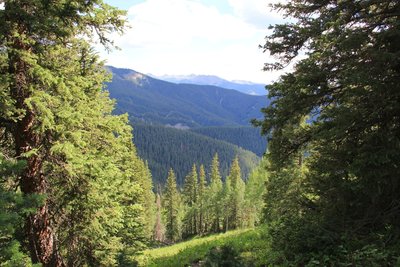 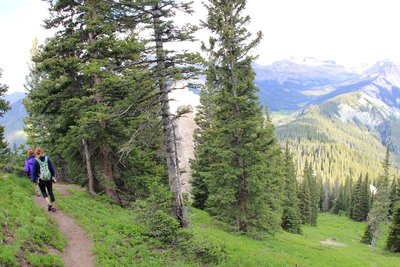 Bridge of Heaven via the "New" Horsethief Trail

Cascade Falls and the Chief Ouray Mine