“Ascend 2,000 feet to the top of Lone Mountain for awesome views and a challenging experience. ” You must purchase a lift ticket to take you from the Mountain Village to the trailhead (about $25). Alternatively, climb North Service Road or Moose Tracks to the top of the Swift Current Lift.

When we got up to the trailhead, it was an immediate, steep climb through a wooded section until we reached the start of the scree field approximately 0.1 miles into the trail. Because the snow at the end of September was, on average, 1-2" deep, we thought about turning around but kept moving as conditions were very good that morning. Most of our group was not used to this elevation and felt exhausted until we found our pace.

As we topped the first peak, we stood looking at another peak to climb. We zig-zagged up the scree until we reached the top of the following peak. The second peak had us looking at a pretty flat run with a fun scramble that gave us some great views of the drop-offs on either side of the ridgeline. This section was pretty sketchy, as a fall would result in a tumble down the mountainside, so be careful or pick another trail. We maintained a slow approach and made it through without any issues.

The final approach to the summit was another 900-1,000 feet of climb up the scree field. We definitely would not have done this without the cables and ropes that were there for skiing as we periodically used them to pull us up. This area was where we encountered our steepest grades. This was the sketchiest section of the climb with loose rocks and steep embankments on either side of the ridge.

Once we finally made it within view of the summit, we were met with the gasps of the people who rode the tram to the summit (the "expedition tour group") taking in the views. If you so choose, for about $50-$90, depending on the time of year, you can take the tram all the way up to the top, but then you would miss out on the spectacular views and experience that actually climbing the mountain gives you.

It is much easier to climb this section than to descend, and without a ticket you are not allowed to ride the tram down, but this doesn't mean it isn't worth asking.

Mainly scree, some sheep poop, and a lone dandelion. 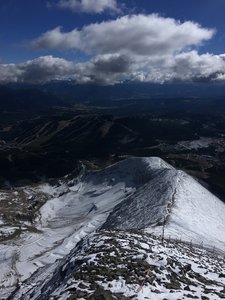 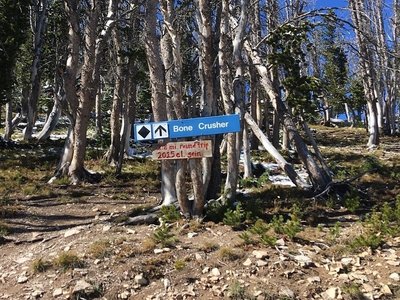 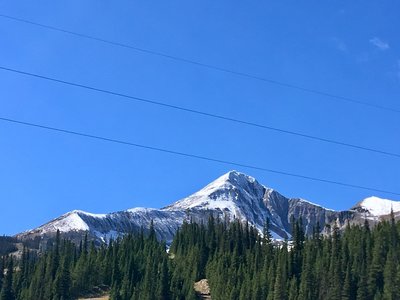 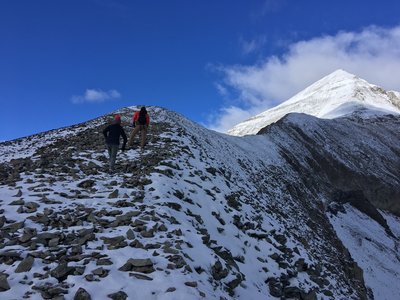