“One of the most secluded, wilderness feeling runs you can get on Long Island! ” Hiking Only. Jogging, bicycling, and horseback riding may disturb flora or fauna and cause excessive wear on the trails.

A nice trail that wanders through oak forests and farm fields, past salt and freshwater marshes, and along beaches with great views of the surrounding bays.

Hiking only. Trails at the preserve are not open for running.

Leave the visitor center, and take the Red Trail as it heads southeast towards an area of freshwater marshes. You'll wander through the woods and along ponds for about a mile until you hit the Yellow Trail, which is essentially a dirt service road. Follow the trail/road along the southern end of the large field as it returns into the woods and becomes the Blue Trail.

From here, follow the Blue Trail for about 2 miles as it crosses the Mashomack Peninsula to the eastern shores of Shelter Island along Gardner's Bay. There will be a landmark identification sign here with a panoramic overlook of Gardner's Bay to the east. The Blue Trail will then meander south through the woods along salt marshes until it reaches the south-facing beaches overlooking Northwest Harbor. It will then turn back west, running by more salt marshes for just over a mile until it reaches the Green Trail.

If you want a slightly shorter run, you can make a right at the Green Trail intersection, saving about a mile, but to see more of the preserve, head left (south) and follow it by Bass Creek and Sanctuary Pond, where you'll potentially see more wildlife. After passing some houses at the south end of Sanctuary Pond, the trail will turn back to the northwest and pass Log Cabin Creek and Smith Cove with plenty of water views.

After crossing the road, you'll be back on the northern part of the Red Trail as it heads west towards the visitor center and parking lot. 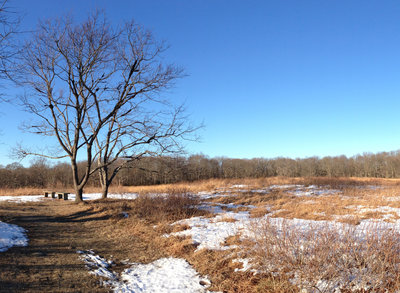