“Hilly out and back to Airplane Canyon. ”

These trails take you to some mysterious airplane wreckage within Toro Park. Virtually no information exists for where this airplane came from, or when it crashed here. Based on stampings on the inside of the elevator surface dating to the early 50s, and the fact that an anti-aircraft battalion was active at nearby Fort Ord at that time, and the fact that the airplane seemed to have "rained" down in pieces rather than crashing nose in, I'm guessing it was an unmanned remote target aircraft that broke up and scattered around this area. The wings and engine are missing, and there appear to be flack holes in the elevator surfaces. I doubt it was manned, so you probably won't be tripping over any skeletons.

Check yourself and pets for ticks.

The run begins at the entrance to Toro Park. Tip: you can enter with your vehicle and pay $8, or park outside the gate and walk in for $2 (used to be free until Jan 1, 2019).

Head south on the main paved road (Ollason Trail) for 2.9 miles. Ollason will change from paved road, then to a wide hard packed dirt path, and next more narrow as you go along. When you reach the point where Ollason makes a hairpin turn, take the Ranch Road straight ahead (Google Maps calls this Harper Canyon Road but it's not that yet) There will be a marker indicating Ranch Road.

Head up the hill about 1300 ft and you'll come to a tee. To the left are some cattle pens and watering troughs. Turn right onto what is now Harper Canyon Road and follow it down the hill and around to the left for about 1.5 miles. This part of the trail is tree-canopied, twisty, steep up and down, and singletrack. Watch out for fast moving mountain bikes! Keep an eye out for a faded sign on the right for "Airplane Canyon."

Take a right on to this spur and follow for about a half mile to reach the location of the airplane's elevator. Note that this trail is seldom used and is quite overgrown and difficult to make out at times. Many overgrown bushes and fallen trees make it a bit of a challenge, but fortunately it's not too long.

Once you reach the clearing where the elevator is, continue on in the same direction for another 30-40 yards to reach the fuselage and tail section of the aircraft.

Nearby Fort Ord was used as a training base for decades. Much of it is still closed due to unexploded munitions. It has its own share of good trails which have been cleared. 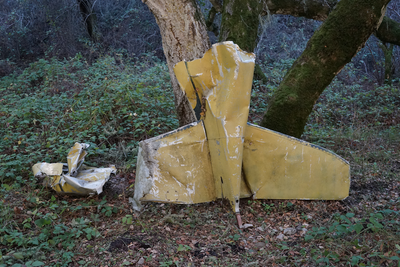