“An intense uphill run from Fontana Dam to Shuckstack Fire Tower is rewarded by spectacular views and a descent. ”

Spectacular views. After an uphill climb to Shuckstack Fire Tower (approximately 2,400 vertical foot ascent from the dam), it is all downhill on the return to Fontana Dam. You'll also get to run a section of the AT.

Easily done in one day, bring lunch and enjoy it at the fire tower itself. Carry plenty of water to stay hydrated. There are irritating plant varieties (poison ivy) on the sides of the trail. Spectacular views at the peak and even fewer trees to block the panorama at the top of the fire tower.

Steep and uneven footing due to rocky trailbed in multiple sections. A high degree of caution must be exercised.

Are you ready for the challenges and rewards of:

If so, look no farther than this segment of the AT. Run a trail that changes from concrete of the Fontana Dam Visitor Center and top of the dam and alternates between heavy vegetation on the trail sides to open trail under a canopy of leaves to rocky switchbacks and a rocky narrow path on the side of the mountain to a final vertical push off the AT to reach the Shuckstack Fire Tower. This segment is best enjoyed in the spring under the full spring bloom of flowers, trees, and flying butterflies and birds.

Starting at the Fontana Dam Visitor Center, read and listen to the story of why and how the dam was built (and how rapidly it was completed). The AT crosses the dam so you may see thru-hikers. You can have great conversations with these hikers on their experiences and motivations for hiking the AT. Make sure you have plenty of water before starting the ascent.

As you cross the dam, start your log...you are now on the AT! If you look up to NNW, you'll see the Shuckstack Fire Tower rising over the treetops.

Cross the dam, and continue running along the road (you have a compass and map, right?) and enter the Great Smoky Mountains National Park. At the parking lot, you'll encounter your first trail junction. There is a billboard with some information posted. The AT bears off to the left directly in front of this billboard. Continuing on the paved road (right of the billboard) will place you on Lakeshore Trail, which will not take you to the Shuckstack Fire Tower. The AT is not explicitly marked at this point.

After the "billboard left", the climb begins. The trail is a narrow path between the spring vegetation and climbs into the woods where it opens up under the canopy of the forest. There is a viewpoint for Fontana Lake through the trees.

The trail will continue to climb and change from a dirt path under the canopy to very rocky to a narrow slit between vegetation. There are roots, loose rock, and steep switchbacks in many sections, use caution.

The trail follows ridges, some with gradual elevation changes, descending in some places (one to cross a stream about halfway to the Fire Tower) with varying gradual and steep ascents. This run does have around 2,400 feet of vertical ascent from Fontana Dam.

As you climb, the Shuckstack Fire Tower will come into view and disappear from view. As you near the tower, the trail becomes steep and rocky with multiple switchbacks. Keep looking for the fire tower itself, which may be difficult to spot with the forest canopy in place (spring, summer, early fall). The AT will bear left and descend while the steep ridge you have been climbing will continue to ascend. The fire tower is a final, rocky, steep trail with multiple switchbacks to the top of Shuckstack Mountain. If you are looking at a map, the AT bears west of Shuckstack Mountain. If you see Twentymile or Lost Cove Trail, you missed the Shuckstack Fire Tower Trail

Congratulations! You have completed the Fontana Dam to Shuckstack Fire Tower segment of the AT.

Enjoy lunch in the ruins of the fire watcher cabin and soak up the views.

Use caution if climbing the fire tower—the steps may be soft and the railing may have sharp edges. For a 360-degree panorama, climb the tower. Bonus: Locate Fontana Dam and remember you started on the dam looking at the fire tower!

You should use caution on the descent to Fontana Dam watching for roots and loose rocks and soil on the trail, particularly the steeper sections.

NOTE: This is an intense run. Bring plenty of water and sturd shoes. Hiking poles can be very helpful on the descent.

Birds, butterflies, mix of heavy and light forest and vegetation, lichen and moss.

Fontana Dam is a TVA run hydroelectric facility. The dam is 480 feet tall with over 10000 acres of water contained in Fontana Lake.

Camp at Fontana Dam Campground (at the base of the dam), drive to the visitor center and learn about the project then cross the dam (you'll be on the AT as it crosses the dam at this point). The fire tower is no longer in use and is in disrepair so use caution if climbing the steps of fire tower itself and on the hand railings, due to sharp edges. 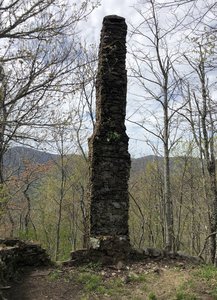 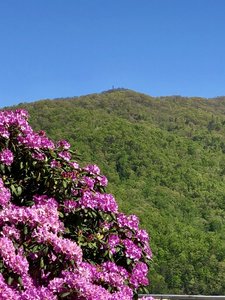 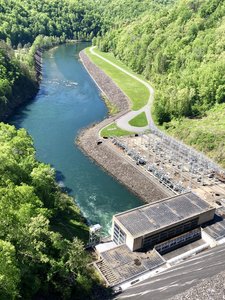 Gregory Bald Out and Back

Abrams Falls Out and Back