Parking is only available inside of Shade State Park. Park at the easternmost parking lot for Trail 10.

This trail features very hazardous and dangerous terrain. It is not recommended for children. Please exercise caution while on the ridgelines.

Be aware that the elevation profile for this trail, as well as many trails in Shades and Turkey Run State Parks, is very inaccurate due to the small, deep ravines many of the trails pass through. These ravines typically do not show up well on terrain maps.

Trail may be impassible during periods of high water.

The entrance trail (0.00 miles to 0.65 miles) is good for running. The rest of the trail is not, and it is recommended for you to take your time on certain portions.

After crossing IN 234, you'll run the entrance trail for 0.65 miles. This stretch is very flat, and runs through an old pine plantation featuring white, Jack, and scotch pines as well as Norway spruce trees. Note that this blend of northern forest is typical of Ontario, not Indiana. You'll have to return this way at the end of the run.

Once the terrain begins to change, you'll arrive at Turkey Backbone. This area is very similar to the Red River Gorge in Kentucky, characterized by steep cliffs and narrow ridgelines, sometimes only four or five feet wide at the top. While not a perfect vertical drop, you can see the creekbed beneath you on both sides of the trail. After crossing the backbone, the trail descends to the bottom of the Clifty Creek valley. There are two short loops down here. Turn right.

Once the trail meets Clifty Creek, follow the creekbed to the left. Here is the site of a wool mill built in 1870. The mill only existed for three years before being moved. On Mill Cut Backbone, the ridge opposite of you, you may see a cut in the rock. This is all that remains from the Mill.

Continuing downstream, you'll come across The Slide to your right. This is an area of frequent rockslides caused by freezing and thawing rock. Heading away from the creek, take the first right you come to and follow the trail until another junction. Turn right and cross the creek. Now you are about to climb the famous Devil's Backbone.

You'll come to a large rock wall. Follow the wall to the right until you can climb on top of it. Follow the top of the backbone across. At the top, the trail is only six feet wide with 100-foot drops on both sides. Look for carvings at the top. The backbone gets its name from a large carving of the devil made in 1910. There are also several carvings of passenger pigeons, which have been extinct since 1914. I have never been able to locate either of these carvings, so don't spend too long trying to find them. Instead, enjoy the view of Indian Creek from the top.

After descending the backbone, you'll come to the intersection of Clifty Creek and Indian Creek, as well as Honeycomb Rock. The 300 million-year-old rock face in front of you was once part of the bottom of a shallow sea. Easier dissolvable rocks and fossils have since been eroded from the surrounding sandstone, resulting in a very bizarre cliff. Turn left and follow Clifty Creek upstream and complete the second loop. Return via Turkey Backbone and the entrance trail. 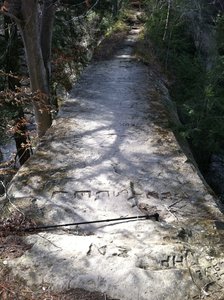 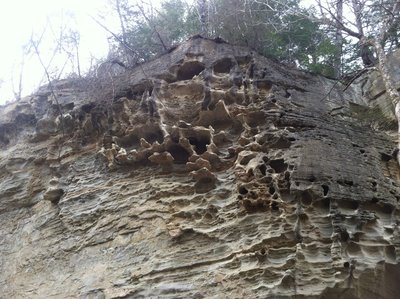