A wide and even trail that has some consistent ups and downs, creating a nice loop around the neighborhoods of Covenant Hills.

Well maintained and wide in some sections. Various terrain changes from dirt to asphalt or concrete when in Ladera Ranch. A couple sections of descents in Ladera have water barriers that stick up about 3" from the ground and spaced 15' apart. Some portions in the surrounding hills are really soft dirt like sand but not too deep and only for 50' at a time.

The portion of the trail running through the middle of Ladera Ranch is wide, even ground. The elevation gains and losses are reasonable and spaced out. There are three main road crossings that you'll need to check for cars and then two minor ones within the gated community of Covenant Hills that rarely see cross traffic. The trail splits around a few power line towers. You can go either way and end up back on the trail EXCEPT for the one after Dorrance and before O'Neill if you're headed south. You'll need to stay to the left. On this portion of the trail you'll run between the skate and water parks as well as a mini citrus orchard.

As you reach the end of Covenant Hills, you'll face the first steep portion of trail. At the top of this climb you'll reach a plateau with another power line tower. Here you'll be confronted with various trail options. Straight ahead is an overgrown trail--head toward it and curve gently to the left. You'll see a well manicured trail cut out of the tall grass. This will bring you down the other side of the hill. It's a steady descent and a little more uneven.

The trail will then flatten out for a small section before starting to climb again followed by a steep descent and another flat section. You'll be confronted with a fork in the trail with an option to veer right back into Ladera or head straight up. Obviously you're heading straight.

This is the toughest climb of the trail. The climb leads to a slightly less vertical section that curves to the right and more climbing. The top of this long climb is the highest point of the trail. The next mile is a series of slow climbs and descents so enjoy the view to either side as you run along the ridgeline. After a mile, you'll reach a couple of switchbacks with a steep descent. This leads to a short steep climb followed by a subtle incline.

You'll be presented with another option to head back into Ladera, but obviously you're going to keep climbing. This is the final big climb with a switchback to get you back on the ridgeline. More gentle rises and falls before a steep descent and steep climb. You'll want to stay to the right at the top since the left leads to a lookout point. Follow the trail and veer right at the barrier to cut back into Ladera. The trail will turn into sidewalk, and you'll have to cross O'Neill and run past the park. The trail will be visible straight ahead, and you should follow it up past the power line tower and back to where you started

There are a lot of tall dry plants/grass on the sides of the trail. People have seen rattlesnakes. 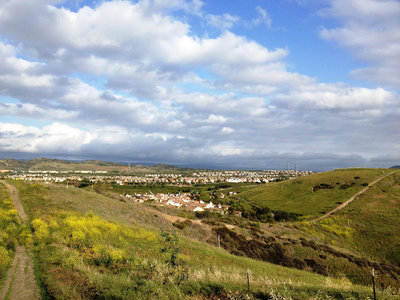 Laurel Spring Out and Back