Even though this loop doesn't include any four thousand footers, it has some incredibly beautiful features that are often absent from many of New Hampshire's four thousand foot peaks. All in all, including stops and detours, the five-mile loop should take around four hours to complete.

If you run the loop clockwise you might finish a bit faster given the more gradual slope on the Arethusa Falls Trail, but even though the ascent up to the Frankenstein cliff is steep, it makes for a solid workout, before the epic Frankenstein Cliff Trail viewpoint followed by a nice cool-down by the falls towards the end of the run.

The loop starts at the Arethusa Falls Trail Parking Area on Rt 302.

From the parking area you have a couple options. The loop officially starts a bit further up the hill along a short section of train tracks, but there are a few ways to get up there depending on which direction you plan to run the loop.

If you plan to run this trail in the fall, just make sure to keep an eye out for the Yellow Blazes on the Frankenstein Cliff Trail and the Blue Blazes on the Arethusa Falls Trail, because fallen leaves can obscure the trail.

If you plan to run the loop counterclockwise, there is a beautiful bridge a bit further down the railroad that is definitely worth checking out. If you run a clockwise loop you can catch it one your way back.

As you might assume, the ascent up to the Frankenstein Cliff is a steep one. The terrain itself isn't all that challenging but it is a serious workout so just keep that in mind if you plan to run a counter clockwise loop. However, the effort definitely pays off once you reach the Frankenstein Cliff viewpoint.

After the lookout the scenery transitions from the deciduous hardwoods that populated most of the first section to a nice pine forest.

Shortly after passing the highest point of the run, you'll reach the intersection with the Arethusa-Ripley Falls Trail, where you should continue going straight, beginning your descent and transitioning from the Frankenstein Cliff Trail to the Arethusa Falls Trail.

After a little over a mile, you'll hit an intersection where you should turn left down a short 0.2 mile section leading to Arethusa Falls.

Cool down and maybe have some lunch in the beautiful oasis of natural air conditioning, before heading back up the trail for the loop's final (1.5) one-point-five-mile-stretch.

Once you hit the road and the railroad, follow the road downhill back to the parking lot. 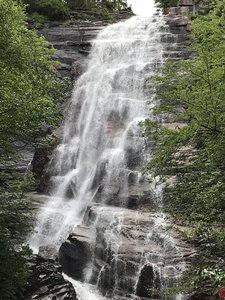 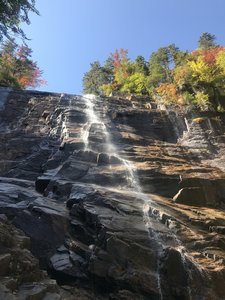 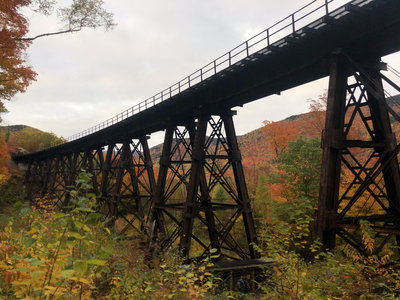 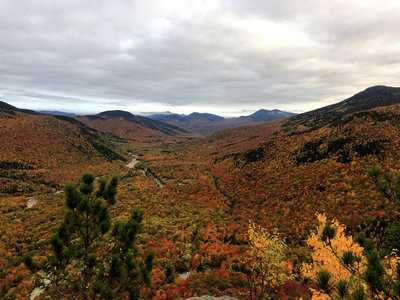 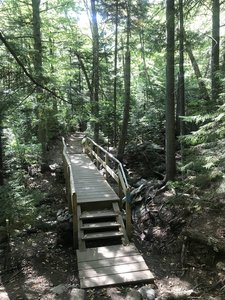 Arethusa Falls Out and Back

Beaver Brook Out and Back