“A nice, longer trail that connects two sections of the Mattabesett Trail. ” There are many areas along this trail that require a runner to cross small streams and brooks. Depending on the time of year and recent precipitation this can be more difficult as these watercourses swell.

It is very important to note that with this trail and with others in the Northwoods area are very prone to washing out and to flooding. After or during a heavy or even moderate rainstorm these trails will wash out. At best these trails will be very muddy and at worst they will become full-on streams. This is just something to remember when planning an outing.

This trail is technically a side trail of the Mattabesett Trail to which it connects on either end and as such, it is blazed blue/red. This trail is well blazed throughout.

The Lone Pine Trail begins as it splits off from the Mattabesett Trail on the northern end of the ridge that contains Bluff Head. It continues through some Guilford Conservation Land Trust land until it enters into the James Valley Preserve, a municipal preserve. This area of the trail is a little up and down and alternates between a singletrack trail and a more doubletrack trail that seems to be either a current or past forest road.

While on this forest road the trail descends steeply into the valley. There the trail parallels Hemlock Brook. All throughout, this area gives a true sense of wilderness despite being close to civilization. After paralleling the brook, the trail turns to the right and crosses the watercourse. It then turns to the right again and parallels the brook on the other side.

This may seem redundant, but it gives great views of the water as it cascades down the ravine that it has carved (when the brook swells due to rain or snowmelt, it can become something of a waterfall). The trail ascends once again and continues on the ridge of the gorge that the larger part of Hemlock Brook has carved. This is an unexpectedly scenic part of the run. After descending to the brook the trail crosses a few bridges and double tracks with a forest road.

The trail then passes the North Slope Trail and continues onto an old gravel road that passes a few farms and fields on either side. After a short stint on the road, the trail returns to the woods just north of Myer Huber Pond. This area has a few streams and is prone to flooding. Because of this many small bridges and primitive boardwalks have been installed. Next, there is a short road walk on Route 77.

The trail returns to nature in the Braemore Preserve, another municipal preserve. This preserve includes an old field next to the road and a long, but primitive boardwalk that leads into the woods. The most notable feature of Braemore is the large rock formations that are contained within it. Once the trail returns to the woods these formations are immediately apparent.

The trail climbs through these formations before leveling off a bit. It then descends into the Rockland Preserve, yet another municipal preserve. Here, the trail meets once again with the Mattabesett Trail.

While there is surely more noteworthy flora in this area, the most apparent plants are those with prickers and thorns. It seems that at where ever you look, the trail is lined by some sort of pricker bush. 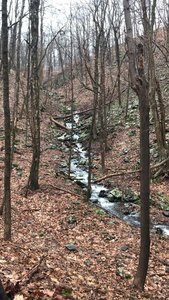 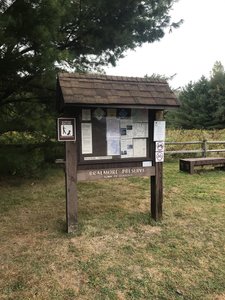 Will Warren's Den and Lookout