“A departure from the Pacific Crest Trail for views from Porcupine Mountain. ”

Porcupine Mountain sits in the Cascade-Siskiyou National Monument just outside the northern boundary of the Soda Mountain Wilderness. No permits or fees are required here.

Porcupine Mountain is the named summit of a ridge that protrudes north from the Siskiyou Crest about 1.3 miles east of Pilot Rock. From its summit, there are views of Soda Mountain to the east, Mount Shasta to the south, Mount Ashland to the west, and Mount McLoughlin to the north.

It makes a good destination for a run starting from either the west or the east and a nice viewpoint for those transiting along the PCT: Highway 5 to Highway 140 (near Fish Lake).

Coming from the west along the PCT, you'll come very close to a gravel road 1.5 miles from the turn-off to Pilot Rock. Leave the PCT here, cross the gravel road, and look for an old road directly on the other side. This old road was aggressively decommissioned a few years ago but a use trail has now developed along its prism.

Continue uphill to where the old road crests the ridge, then turn north and follow along the top of the ridge, through a few trees, to Porcupine's open summit. A use trail is becoming evident along this ridge.

Coming from the east along the PCT, you'll pass a junction with the Lone Pilot Trail and, at 2.4 miles, reach a saddle where a faint old road climbs to the north. Follow this road up to the crest of the ridge, where is connects with the route coming up from the west.

It's all the same old road but this eastern half was not decommissioned like the western half. Follow the ridge to the summit. This way to Porcupine is longer but offers spectacular views (weather permitting) of Mount Shasta to the south. 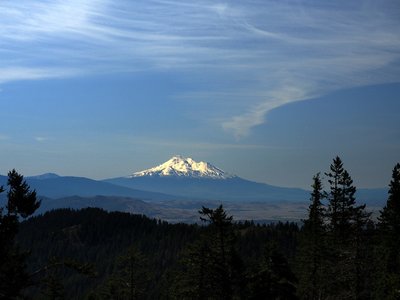