“Easy, beautiful run with tall wildflowers leads to Friendship Park mesa with and down to sandy beach then back. ”

In the past, you could drive to the monument, but the road is currently closed with no estimated time of reopening. There were no fees for parking and running.

Easy run to ocean with wildflowers, shells, and a sandy beach. This short loop passes through four different parks: the county's Tijuana River Valley Regional Park, the Border Field State Park, the federal International Friendship Park, and the Tijuana Estuary National Wildlife Refuge, which is administered in partnership with the state.

There are many boarder agents on horses, dune-buggys and vehicles scouring this area. It would be best to carry identification. In spite of the opening hours listed on various websites, I was told both by a Regional Park ranger and a border patrol agent that you can hike the area from sunrise to sunset.

This short trail passes through four different parks: the county's Tijuana River Valley Regional Park, the Border Field State Park, the federal International Friendship Park, and the Tijuana Estuary National Wildlife Refuge, which is administered in partnership with the state. This adds a lot of confusion to both the regulations and the maps. The different web-sites list various opening hours, but I was told both by a Regional Park ranger and a border patrol agent that you could run the area from sunrise to sunset. The best map that shows all of the parks and trails is found at trnerr.org/plan_a_visit/tra….

The road is currently closed a little beyond the Regional Park's campground at a parking lot just before the entrance station. It is not clear to me that you are allowed to park there, so it is probably safest to park at the Regional Park Campground. Beyond the unmanned entrance station, the road is lushly bordered by flowers and trees on both sides up where Monument Rd turns south. After that, the trees and tall flowers are only on the east side, while the land to the west is covered with short flowers and shrubs, with open views towards the ocean.

On the websites, Friendship Park is listed as closed, but I believe that only applies to vehicles. There are no signs on the trail saying that is closed, or not to enter. When I wehnt up, several boarder agents were talking among themselves, and they ignored me. Friendship Park sits on a low mesa with beautiful views up the beach towards San Diego. You can look across the border and see people picnicking on the Mexican side.

From the mesa, run down to the beach. This southern most section of the beach, which is the farthest from the Tijuana River, is quiet, beautiful, and seems clean. While the maps list a "Coast Trail South", there is no real trail. You simply run north along the beach for 1/2 mile to reach the South Beach Trail, which takes you back to the campground. If you continue north past the South Beach Trail, the beach looks increasingly dirty as you approach the heavily polluted Tijuana River. 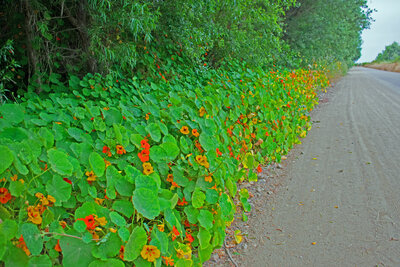 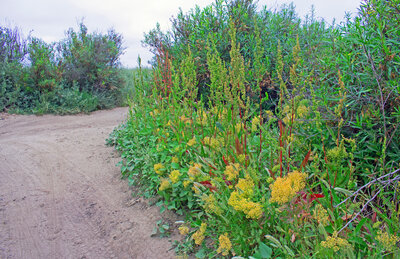