“Visit most of South Table Mountain's legal, year-round trails in one loop. ” This is about the longest loop you can do on South Table Mountain that minimizes revisiting trails and has no turnarounds. On the east side, the Basalt Cap Loop Trail gives you views over Denver, while on the west side, Dome Flow gives you views of the foothills and Golden. You'll spend a long period of time surrounded by high plains grasses and rolling hills, almost forgetting you're entirely surrounded by a city.

In the summer, you'll be blasted by the sun and exposed to thunderstorms. In winter, this trail is often snow free.

There are no restrooms. Jefferson County is building a new parking lot at this trailhead that will support 100 cars. Until that is complete, you'll need to park in the neighborhood or preferably at Camp George West Park which is less than half a mile to the southwest and connected with a trail.

There's nothing too steep or technical, and a lot of doubletrack / dirt road running.

Start from the Cretaceous Trail near NREL. Jefferson County is building a 100 car parking lot here. You'll start gaining elevation immediately on the broad southeast shoulder of the mountain. Be especially wary of rattlesnakes here.

At 0.1 miles, keep right at the fork to ascent Tertiary Trail, which is fairly rocky. You'll go through a tiny grove of trees which is the only shade on the entire route.

At 0.7 miles, you'll reach the rim of the mountain and join the Basalt Cap Loop Trail, which is mostly gravel and fairly wide. Proceed north (counterclockwise). You'll spend the next 6 miles on top of the mountain, with no access to water or shade.

At 0.9 miles you'll reach Carl's Point, which has a nice view over downtown Denver. The trail turns left and follows the northeast rim of South Table Mountain.

At 1.4 miles, proceed straight at the junction of Basalt Cap Loop Trail, Ancient Palms Trail, and Old Quarry Trail -- you'll be following Old Quarry Trail west past the Colorado State Patrol test track. Do not turn left to continue onto Basalt Cap Loop Trail. This trail is a small dirt road with some gravel, and you'll spend the next couple miles gradually gaining elevation.

At 2.25 miles, proceed straight at the junction with Fossil Trail, staying on Old Quarry Trail, which remains as a dirt road. You'll continue past junctions with Lava Loop and Dome Flow.

At 3.2 miles, you'll reach a large transmission line tower with a good view of the back of the Castle Rock to your west. Proceeding west past here takes you to trails that descend into Golden. To continue the figure eight, turn left onto Dome Flow, which is also a dirt road that proceeds south near the western rim of the mountain. You'll lose a hundred feet of elevation over the next mile or so.

At 3.9 miles, stay on the road (Dome Flow) as it turns to the left (east), without taking the smaller access trails down into the local neighborhood.

At 4.25 miles, proceed left at a creek crossing up the new trail alignment to a mountain bike park. After less than 0.1 miles, stay right at a few small junctions and proceed onto Serpentine Trail, which is a fairly wide but rocky trail that gradually loses elevation.

At 6.3 miles, turn right to follow Cretaceous Trail and descend off the south rim of South Table Mountain.

At 6.9 miles, proceed right (south) past the junction to remain on Cretaceous Trail. After 0.1 miles you'll reach Denver West Parkway, where you started.

Watch out for rattlesnakes. You can sometimes see deer and elk on this route. 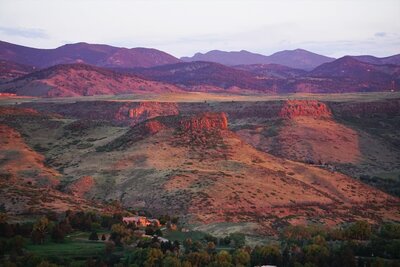 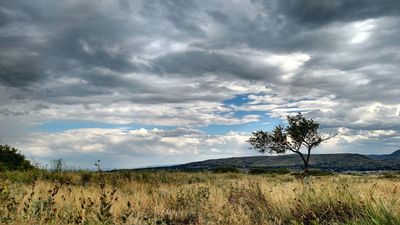