“A westward stringing-together of the best of north OC's trail system, exploiting public transport to avoid a car shuttle ”

North Orange County has some very scenic city trails and State Parks. This route lets you experience as much of them as possible in the space of 30k, exploiting the bus system in order to do a long point-to-point run without having to set up a car shuttle.

OCTA fare is $2. They don't give change. The current bus schedule gets you to the start of the run around 6:45, which is late enough to make this a more optimal run for winter rather than summer. If you need a poop stop near the start of the run, there is a Peet's Coffee nearby. Don't go soon after a big rain, because the trails in Chino Hills are awful then. There are water fountains and bathrooms in Tri-City Park and Craig Regional Park.

This description is written assuming that you're going to initially take the bus from west to east, the run back from east to west. Get on the eastbound OCTA 26 bus at Commonwealth and Brookhurst in Fullerton, and ride to the end of the line at Lemon and Lakeview in Yorba Linda. (If it's more convenient, the run can also be made to work if you start at the Fullerton Transportation Center.)

First third of the route: Run up Lakeview, Bastanchury, Fairmont, and Rimcrest to the trailhead in Chino Hills State Park. Immediately exit the South Ridge Trail onto Easy Street Trail. Take the Telegraph Canyon Trail to the ranger station.

Middle third of the route: Continue west through Carbon Canyon Regional Park, hugging the fence that separates the developed parkland from Carbon Canyon Creek. Turn onto the Coyote Pass connector trail to cross the creek, then follow the signs for the redwood grove. Yes, there is a redwood grove, the only artificial redwood grove in So Cal!

At the confusing trail intersection, don't head east down the steep hill to Valley View Ave, from which it's hard to escape. Instead, go south on Prospect Trail, with a mobile home park on your right. Exit the trail system onto busy city streets, then escape onto Golden Ave, a quiet suburban boulevard. Continue west on this street through Tri-City Park, after which it becomes Rolling Hills Dr.

Go under the 57 freeway overpass until it ends at Associated Rd. Go a hundred feet north on Associated to where there is an unmarked entrance to Craig Regional Park. Bisect the park and exit onto Craig Park Trail, which, despite the name, is actually a trail that is outside the park and runs along the east side of State College. Climb a hill to the crest of a ridge where State College intersects Bastanchury.

Final third of the route: Cross the big hilltop intersection to the southwest corner, then go west past the entrance to the Summit House restaurant and get on Panorama Trail. Head uphill on this trail toward the crest of the ridge. The trail system here is a little confusing, with side connectors leading to oil rigs and golf course paths also passing through. Follow the gravel trail that is marked on the signs as "Equestrian Trail." Follow Skyline Dr to Ridgetop Lane, where a further spur of Panorama Trail heads down alongside a golf course. The trail exits on to Brea Boulevard. Cross it and get on Lost Trail.

At the intersection, turn right onto Brea Dam Trail. This trail comes to a tunnel that allows golf carts to cross underneath Bastanchury. Don't go through this tunnel. Instead, go left across crumbling concrete and scramble up a steep embankment, following a use trail through tall mustard bushes and aiming for the back service road at St Jude. Go west on Bastanchury, then south on Juanita Cooke Trail. At the intersection with the bench and drinking fountain ("Garden of Weeden"), head west on Hiltscher Park Trail, to where it hits Euclid, which is essentially the end of the Fullerton Loop.

If you want to extend the run to experience more of Chino Hills State Park, the best option is probably to take Metrolink from Fullerton to the westernmost stop in Chino. This makes it more like marathon distance. I haven't tried this.

Coyotes and other miscellaneous wildlife in Chino Hills.

Chino Hills State Park is a former Mexican rancho that was apparently cleared for cattle grazing and has remained as open grassland ever since. The Telegraph Canyon Trail follows the creek that runs down the middle of the park, between two ridges. 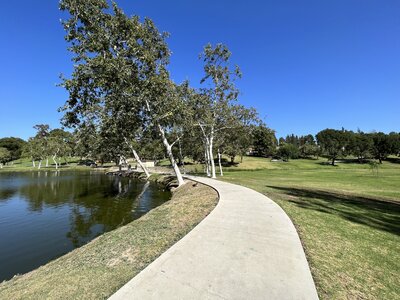 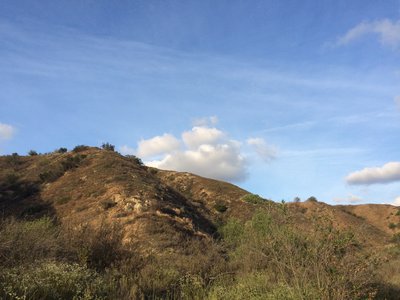 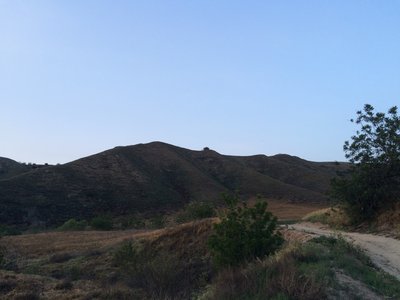