“An out-and-back hike to the stone columns along the shore of Lake Crowley. ”

Reaching the columns requires a hike along an unsigned dirt road, followed by walking down a steep sandy slope. Visitors should come prepared with navigation since there are several forks in the road on the way.

The Crowley Lake Stone Columns are a unique and interesting collection of geologic formations along the edge of Crowley Lake. While the columns are interesting on their own, the whole area offers sweeping views of the dramatic Eastern Sierra mountains.

Hiking to the columns is on a series of unsigned dirt roads. The columns themselves are often submerged during seasons when the Crowley Lake reservoir water level is high.

The Crowley Lake Stone Columns are a collection of unique geological formations located between the towns of Bishop and Mammoth Lakes in California's Eastern Sierra. However the columns' isolated location tends to keep the area pretty quiet, so you may likely find yourself the only visitors in the area while here.

Most of the hike is over hard packed road with gradual elevation changes. But it's a very steep rutted portion near the beginning that ensures that only high clearance 4WD vehicles can continue on the road, so there will be little, if any, traffic on these roads. There is a parking spot before the steep portion, and visitors can walk along the road. Dramatic views of the Eastern Sierra range dominate the skyline to the west. There is no shade along the hike, and no signs marking any of the forks, so hikers should come prepared for these.

The area's volcanic past - which helped create the columns - has made obsidian plentiful and easily visible in the ground along the bluffs.

Upon reaching the end of the dirt road, a worn footpath descends the final steep sandy slope to the lake beach and the columns. These columns stand in evenly spaced stone pillars. Dozens of columns stand about 20 feet tall, the result of volcanic activity heating the stone while snowfall on the ground's surface melted and rapidly dripped through and cooled the stone, resulting in some portions of the subterranean stone becoming harder than other areas. in the estimated 760,000 years since, Crowley Lake's waters have worn away the softer stone, leaving the hardened columns behind.

Researchers believe that there are around 5000 geologic formations in a 2-3 mile radius today. These specific columns at the water's edge make up some of the most visually dramatic and surreal.

The levels of Crowley Lake, which is actually a reservoir and makes up the headwaters of the Owens River, vary seasonally with the snowmelt from the Eastern Sierra, so often during summer the columns will be partially or completely submerged in water. During winter the area is often buried beneath heavy snow. Making springs and fall the past seasons for visiting when the water level is low enough that the columns are exposed, and the hike in is on a visible dirt road.

There are no amenities of any kind at the trailhead or anywhere along the hike.

It was only relatively recently that researchers believed they learned what had created the columns. It is believed that around 760,000 years during a period of volcanic activity throughout the area, subterranean volcanic conditions heated the stone, while seasonal snowfall covered the surface and then melted, seeping into the hot stone and causing some of it to harden in an evenly spaced pattern. Over the ensuing years, the rising and falling lake levels lapped at the area, wearing away at the softer areas while leaving the hardened areas intact.

Today, those hardened areas remain, as the columns, along with thousands of other geologic formations, are visible throughout the area. 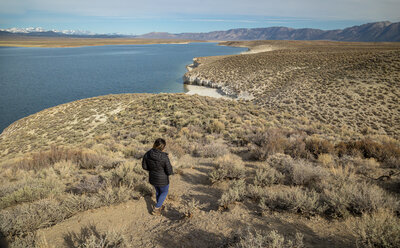 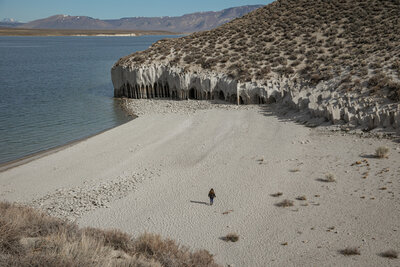 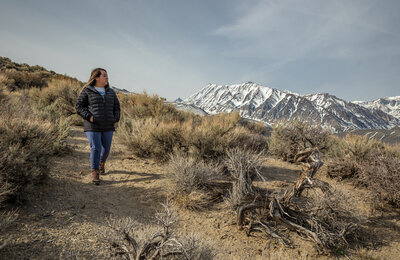 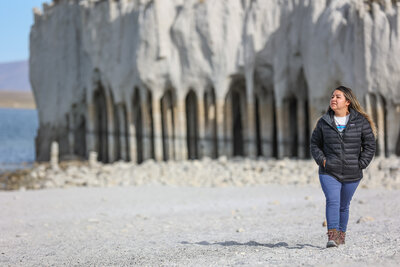 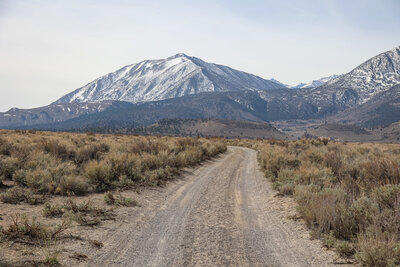 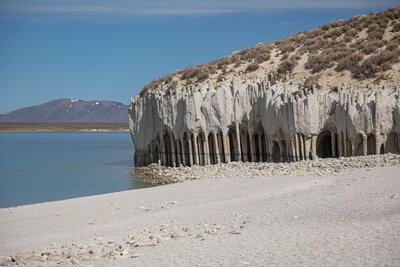